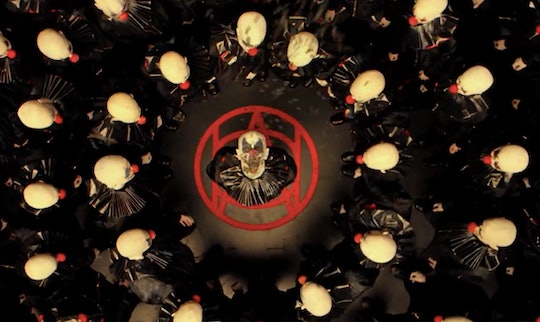 The 'AHS: Cult' Trailer Will Remind You Of A Familiar Nightmare

If you're wondering what could be more terrifying than the 2016 election cycle, there's an answer for you now. The American Horror Story: Cult trailer was leaked this week and it's terrifying. It's also supposed to be loosely inspired by the election. The best, or worst, of all the things. It's really, really scary.

The trailer was released at Comic-Con at the San Diego Convention Center this week, but FX has also launched a brand new website for this season, which premieres on Sept. 5. The video, which is centered around a bunch of crazy looking clowns and balloons, is on the website under the title "Week One." The other seven videos on the site are locked, so fans are in for some more gruesome teasers leading up the fall.

The creepy clown motif totally makes sense, and showrunner Ryan Murphy has been teasing it for months. Earlier this month, Murphy posted an image saying that Twisty the Clown from Season 4 was "baaaaack." Then again, American Horror Story has a tendency to play with our heads, so don't bet on anything just yet.

Murphy has also posted mockups of the clown's faces and other subtle hints about what to expect. Including a man covered with bees. Horrifying.

The season is supposed to be about the election, but it's unclear how this army of clowns fits in just yet. But it's not all a mystery. Sarah Paulson is signed on for this season, along with Evan Peters. As fans know, Murphy likes to keep his casting all in the family, so he's bringing Billie Lourd, who he worked with on Scream Queens along, too. Billy Eichner and Lena Dunham are also signed on to star.

Murphy announced Dunham's casting with a tweet saying, "Thrilled that my talented friend Lena Dunham is joining the AMERICAN HORROR STORY family. Always wanted to work together, and now we r!" Some fans were pretty upset that he was bringing the Girls creator and star onboard.

Later, Dunham seemed to address some of the hate on Twitter herself, using a Clueless reference, no less. She wrote, "OMG Internet teens are way harsh, Tai. And also potentially too young to understand "way harsh, Tai." So she's not here for any American Horror Story fan hate.

With all of those creepy clowns and an election to rehash, who has time for hate anyway? There's enough going on already.