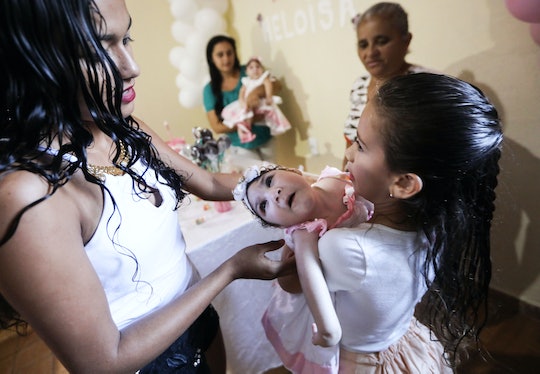 The Real Number Of Children With Disabilities On Medicaid

Both the House and Senate health care bills make dramatic cuts to funding, this much is clear so far, and the most obvious, troubling cuts are the ones being made to Medicaid. Unfortunately, these cuts will impact the large number of children with disabilities on Medicaid — some of our most vulnerable citizens. By creating policies that would strip these children and their families of some or all of their coverage, the GOP is showing where its priorities lie.

Both bills would take away billions of dollars in funding for Medicaid. The Senate's version, the Better Care Reconciliation Act, would result in an estimated $772 billion in cuts to Medicaid spending by 2026. The House bill, the American Health Care Act, would lead to roughly $880 billion in cuts in the same timeframe.

Medicaid is a crucial resource for children with disabilities and other severe health care needs, such as those with Down Syndrome and cystic fibrosis. According to the Kaiser Family Foundation, Medicaid and similar services provide these children with 44 percent of their medical expense coverage. The foundation reported that almost 36 million kids were enrolled in Medicaid or CHIP as of April 2017 and $89.6 billion in Medicaid funds went to care for these children.

Further complicating the issue, nearly three quarters of special needs children come from low-income families. Private health care coverage isn't always an option for families due to the high cost, underlining the importance of Medicaid. The combination of a low income and the loss of Medicaid coverage would be devastating to these families.

The New York Times recently reported that school districts are also reimbursed around $4 billion each year by Medicaid. These funds are used to meet important needs in the districts' schools, many of which benefit children with disabilities by funding staff members who are trained to support children with unique needs.

Voices from the public and private sector alike have spoken out about the harm such cuts could do to U.S. children with special needs. Vickie Glenn, a Medicaid coordinator for Tri-County Special Education, told The Times that she doesn't believe this is a party issue:

If I could have 10 minutes with President Trump, I could help him understand what we do, why it’s important. If he understood, he would protect it, because this isn’t Republicans and Democrats. It’s just kids.

She also explained that schools aren't profiting from their Medicaid funding:

I realize there have to be cuts, because Medicaid’s been out of control. We have so many more demands. We’re not in it making money. We’re constantly in the hole.

The move to per-capita caps on Medicaid funding would have complex and lasting repercussions for children with disabilities. Such changes would leave them with less access to health care and few choices of providers. The majority of children enrolled in Medicaid, many of whom have disabilities, are considered "mandatory" condition enrollees. Mandatory condition members include incomes below the poverty line and those families who receive Supplemental Security Income, or SSI.

There is no denying that the masses of special needs children relying on Medicaid would be greatly impacted by loss of funding. By forcing these families to rely on other federal coverage options with less funding, lawmakers are making a statement about what is important to them — and it is not the children.