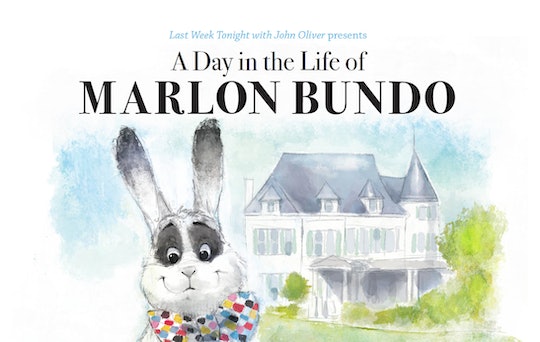 When Karen Pence, the wife of Vice President Mike Pence, announced this week that she's starting a new job teaching art at the anti-LGBTQ Immanuel Christian School in North Virginia, people were rightly outraged. Many took to social media to call out the school's discriminatory practices, which include barring employees from engaging in or condoning "homosexual or lesbian sexual activity," and refusing admission to students who "participate in, condone, or support sexual immorality, homosexual activity or bisexual activity." But few achieved truly epic troll status quite like The Trevor Project. The national support group for LGBTQ youth announced today that they're sending 100 copies of John Oliver's pro-LGBTQ children's book, A Day In The Life of Marlon Bundo, to students and staff at Karen Pence's new job. However, this is not your average trolling — this is trolling for a good cause.

Oliver released his book last year after it was announced that Karen Pence was illustrating a story about her family's pet rabbit, Marlon Bundo, called Marlon Bundo's Day in the Life of the Vice President.

Oliver's book is a parody version of that release, meant to criticize Mike Pence's abysmal record on gay rights. In Oliver's version of the book, Marlon Bundo rocks an adorable bowtie and falls in love with a boy rabbit because, as Oliver said on his show, Last Week Tonight, when he announced the title, "our Marlon Bundo is gay."

In a statement obtained by USA Today, Amit Paley, head of The Trevor Project, said they're sending the books in hopes that the Immanuel Christian School will "adopt policies of inclusion."

The statement includes an anecdote by Luke Hartman, a former student at the school, who said, "The silent and spoken messages of rejection that are constantly felt by LGBTQ students directly impact the relationship they have with their faith, education, and relationships with family and friends."

Others said the organization's purpose would have been better served by sending the books to libraries for kids who actually need them.

Either way, the gesture has gotten people's attention and will likely encourage even more people to check out the book themselves, which is a bonus since all proceeds from A Day in the Life of Marlon Bundo go to benefit The Trevor Project and AIDS United.

As for Pence's reaction to the controversy? She seemingly couldn't care less. Kara Brooks, Pence's communications director, framed the outrage as being an attack on religion, rather than a rightfully furious response to high-ranking person in the government being openly hateful of the LGBTQ community. Brooks said in a statement to CNN yesterday, "It's absurd that her decision to teach art to children at a Christian school, and the school's religious beliefs, are under attack."

But what's really absurd is the second lady of the United States holding a job at a school where the 2018 employment application reportedly required candidates to acknowledge that "marriage unites one man and one woman," and that "homosexual or lesbian sexual activity, polygamy, transgender identity, any other violation of the unique roles of male and female" violates the "bona fide occupational qualifications for employees," per the Huffington Post. Even more troubling is the fact that this isn't Pence's first stint at the school. She reportedly worked there for 12 of the 25 years she spent teaching prior to taking her role at the White House.

In an interview on Thursday with the Catholic News Network EWTN, Mike Pence said his family will "let the critics roll off our backs." But the "critics" aren't going to stay silent in the face of a government ruled by outspoken bigots, and those 100 copies of A Day in the Life of Marlon Bundo prove it.