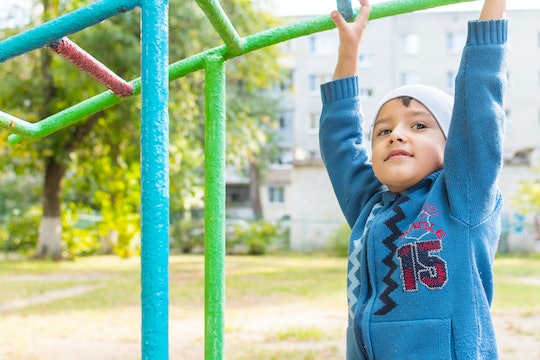 The Anxiety I Didn't Want To Pass To My Kid

I grew up as an indoor kid. I didn’t think of myself in that way, didn’t even know the term “indoor kid” existed until I became a mom, but it helps to convey the intense fears and anxieties of the outside world that had me locked up inside all summers with long library-book lists. I was an immigrant and many of the fears my parents had were valid. I grew up in the midst of hate crimes, with rocks thrown at our windows and racial taunting throughout middle school. So naturally I was not allowed to open the door for trick o’ treaters or encouraged to go to prom.

My anxieties weren’t just social. My parents grew up in a very different world, far away from rollerbladers and ice-skating rinks of suburban New Jersey. I never went camping or skiing, and after eight years of swim classes, I still never was able to go into the deep end.

Thankfully I married someone with a very opposite childhood, who grew up diving off of boats and competing in the rowing team, among other sports. Both of us, in our ways, have pushed for our son to explore, discover, and challenge himself in anyway he wants. And it’s worked. Ever since my son was a few months old, he’s crawled out of beds, run off of steps, and fallen off of tall jungle gyms (my husband broke his arm the first time when he was 5; I’ve never broken any bone in my life). His recovery time is usually seconds before he’s at it again. My best friend refers to my son as a bruiser.

It’s very hard to give your child confidence when you’re trying to keep it together.

Recently, that sense of physical fearlessness I secretly hoped he would possess, in spite of me, evaporated. We took my son to the beach (he loves swim class) and he was absolutely terrified of the water. While it may seem natural — many kids are afraid of the sound and movement of waves — he wouldn’t put his foot in the water and he was too afraid of either of his parents to go near the water. During a recent trip to Hawaii, each time my husband or I dipped ourselves in the ocean we were met with intense sobbing and screams. My son was deathly afraid. Instead of joining his friends or parents in the water, he walked away from the beach to play on a nearby playground.

My instinct was to push him past it. I was desperate to have my son just get over it, learn that the water wasn’t anything to be afraid of. But of course, I can’t swim and I’m afraid of water. So I put the task to my husband. Thankfully, he was much more rooted in his response: “Let’s not push him. Otherwise he may be scarred and never see the ocean as a friend.” We both made a decision to respect his boundaries.

But it’s not always that easy.

Because I don’t want my son to experience the internal social anxieties I did growing up, I often find myself pushing him to socialize in every situation or be the first to ride a horse, even though every part of me is racing inside. Inside I’m terribly afraid of his every move — and I think that’s the natural protectionist instinct of every mom. Added to that are the remnants of trauma, of having to hold down the tears and memories of a childhood that will always be a part of me; of realizing that I will never be as fearless as my son. And then I feel shame around my own fears. It’s very hard to give your child confidence when you’re trying to keep it together.

Remaining nonchalant around my son in situations which bring up my childhood trauma is an unsustainable charade. There’s no way I can keep encouraging my son to be who I never had a chance to be, and communicate that loss at every moment. So I’ve decided to do something new and brave: that I will go on new journeys and adventures with my son, allowing him to lead and be my role model.

I’ve started going camping recently, and my son not only made sleeping in a tent fun but helped me get over my fear of animals and the unknown. I’ve started petting dogs, and even fed some animals at a recent farm school trip after seeing him put his hands in their mouths with feed. I told him I’m not as brave as him, but that I would try.

I hope to start taking swim classes again soon, and start skiing when he learns how. I don’t know if I’ll ever overcome all my trepidations, but I can at least show my son that I’m trying. And that’s as important a character trait as being fearless.