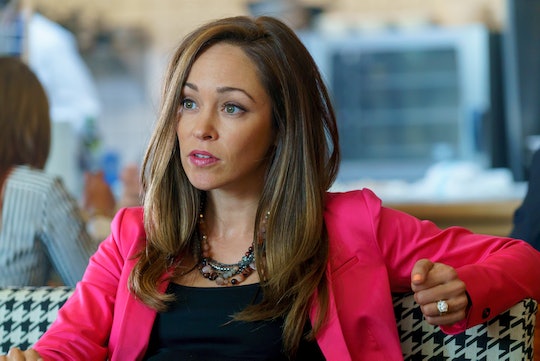 'The Arrangement' Spoilers From Autumn Reeser

The Arrangement is E!'s latest scripted series and it looks like it'll be just as drama-filled as the network's first series, The Royals. The show follows young starlet Megan Morrison (Christine Evangelista) who begins dating major star Kyle West (Josh Henderson) after they meet during an audition. The date turns into a contract marriage, which Megan's agent, Leslie Bellcamp (Autumn Reeser) tells her is a big opportunity. But where will things go from there?During an email conversation with Romper, Autumn Reeser teased some spoilers from The Arrangement Season 1 and talked about exploring the "seedier side" of fame.

While The Arrangement focuses on Megan and Kyle's relationship, it also gives a look into Hollywood life. For example, Kyle isn't only a major star, he's also a part of The Institute of the Higher Mind, which is led by his mentor Terence Anderson (Michael Vartan). Many people have already started comparing The Institute to a fictionalized version of Scientology with the characters of Kyle and Megan paralleling that of Tom Cruise and Katie Holmes. However, the creator and the cast are firm on the fact that any parallels are purely accidental and the show isn't based on anyone.

That being said, Reeser does believe the show provides an accurate look into a certain sector of Hollywood. "It's an accurate window into a very particular, very tiny subset of Hollywood, the world of the extreme A-list," Reeser reveals.

Within this world, the show also digs into some darker themes as well, which fans can look forward to exploring as the season progresses. "It's grittier than I imagined it would be, which I love," Reeser shares. "It goes deep into the underbelly, the seedier side of things in Los Angeles, and handles them with respect. The show has a sense of danger to it that's a nice contrast to the glitzy Hollywood backdrop."

As for her character, Leslie, it's hard to say if Megan can truly trust her judgement. While Leslie does have Megan's best financial and career interests in mind, Reeser admits her character may overlook Megan's other needs. Though, as Reeser puts it, that's also not Leslie's job. "[Leslie's] not Megan's shrink," Reeser says. "She's not Megan's mom, she's her agent and she's very good at handling that corner of Megan's life and thinking about what's best for her client's career."

It looks like when it comes to her personal life, Megan will just have to look out for herself. Hopefully she'll be able to handle this new world that she's being thrown into, but based on what Reeser says about the end of the first season, Megan may find herself in more trouble than when the season begins, and she's not the only one.

"Things do not wrap up in a nice bow for Leslie, Megan or anyone in our story," Reeser teases about a potential Season 1 cliffhanger. "We've definitely set the stage for an exciting and dangerous Season 2."

You can see where Megan and Leslie's stories begin when The Arrangement premieres on E! on Sunday, March 5 at 10 p.m. ET. You can also watch the premiere episode On Demand.