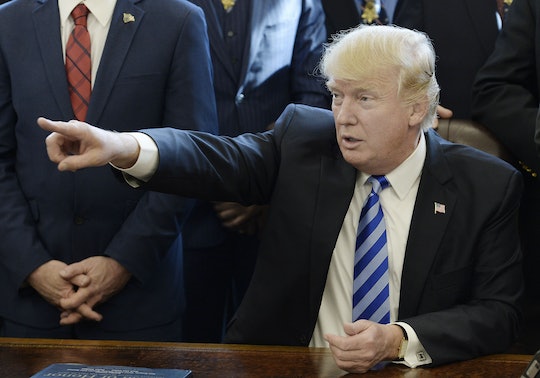 'The Art Of The Deal Jokes' From The AHCA Repeal

While President Donald Trump might have been an established businessman with plenty of deals to his name before taking office, political deals haven't been as easy for him. In 1987, Trump penned The Art of the Deal, based on his success as a businessman. But after Friday's pulling of the American Health Care Act, Trump's deal-making has proven to not be as effective in politics. The irony is thick — which is why The Art of the Deal jokes on Twitter after the AHCA was killed are pretty hilarious.

Trump just couldn't seem to seal the deal when it came to the AHCA. The healthcare reform bill, as it was on the floor of the House, would have left 24 million people uninsured, according to the New York Times. It was this — along with the fact that the bill would raise insurance premiums and make drastic changes to Medicaid — that made the bill a hard sell to Republicans, Democrats, and their constituents. As it turns out, an overwhelming majority of Americans did not support the new healthcare bill — and neither did their representatives. According to the Washington Post, Trump was unable to reach out to Democrats and pressure Republicans to get enough support behind the bill, and he couldn't effectively seal the deal.

It's not like Trump didn't try to secure the votes — according to the Washington Post, Trump took representatives bowling, wined and dined them, and even gave them rides in Air Force One. On Friday morning, White House Press Secretary Sean Spicer even bragged about Trump's measures to get votes, according to the BBC — but it wasn't enough.

Yet, when it came down to citing why the bill failed, Trump placed the blame for the bill's failure on House Democrats, rather than blaming himself. But Trump should have blamed himself, according to Reuters, as Trump's typical negotiation tactics — the ones he took pride of in The Art of the Deal — were thrown out the window. What resulted was the fall of the AHCA, before it could even get to be voted on — and, in turn, a major loss to the Trump Administration in the first 100 days of his presidency.

Trump's inability to make a deal is a success in the long run. While the AHCA was supposed to save the government money, it would have left millions, both Trump supporters and non-supporters alike, uninsured. Thanks to Trump's failure, plenty of people will get to keep their health insurance — so maybe Trump's lack of a deal turned out for the best. At least, until Trump proposes yet another replacement for Obamacare.