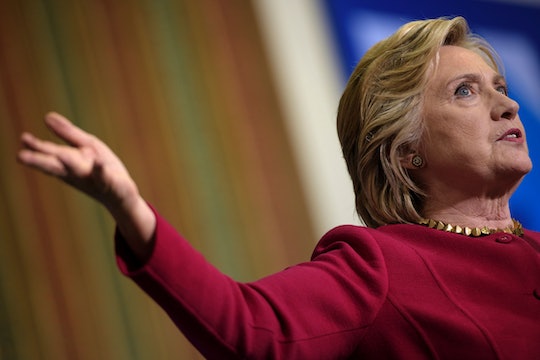 The Atlantic Endorses Hillary Clinton, In A Rare Show Of Political Support

As the 2016 election cycle comes to a close, it's time for people and organizations to start to pick sides. In a rare show of political support, The Atlantic this week endorsed Hillary Clinton, which should come as no surprise to its readers or anyone who pays attention to the inner workings of the media. The magazine is one of America's oldest, founded in 1857 as The Atlantic Monthly in New England by intellectuals exploring "the American idea." It used to feature poetry by American writers like Ralph Waldo Emerson, Longfellow, and other old white men you might have studied in college. It's this history of intellectualism that caused many on social media to roll their eyes a bit by the publication's endorsement of Clinton and its strong stance against Donald Trump — of course, the progressive, "elite" magazine would choose Clinton. But there's more to it than that.

Sure, the magazine is preaching to the choir a bit with its scathing take on why Trump shouldn't be president of the United States. But it chose its position carefully. The editors wrote:

Our endorsement of Clinton, and rejection of Trump, is not a blanket dismissal of the many Trump supporters who are motivated by legitimate anxieties about their future and their place in the American economy. But Trump has seized on these anxieties and inflamed and racialized them, without proposing realistic policies to address them.

In other words, The Atlantic's endorsement doesn't mean that the editorial board is completely enamored with Clinton, either. "She has flaws (some legitimately troubling, some exaggerated by her opponents), but she is among the most prepared candidates ever to seek the presidency," the editors wrote.

The magazine's position is as much about trusting Clinton to be a solid leader and respect for her career in public service as much as it is based in a fear of Trump's experience and, frankly, his personality. The editors wrote that Trump's "affect is that of an infomercial huckster; he traffics in conspiracy theories and racist invective; he is appallingly sexist; he is erratic, secretive, and xenophobic; he expresses admiration for authoritarian rulers, and evinces authoritarian tendencies himself."

In addition to all of that, the magazine added that Trump "is easily goaded, a poor quality for someone seeking control of America’s nuclear arsenal. He is an enemy of fact-based discourse; he is ignorant of, and indifferent to, the Constitution; he appears not to read."

Those are some pretty sick burns from a magazine that has only endorsed two other candidates in its long history. But it's thoughtful, at least. The Atlantic has endorsed just two times before: in 1860 for Abraham Lincoln and again in 1964 for Lyndon B. Johnson. (If you're a history geek, the editorial for Lincoln is definitely worth a read.) For a magazine so steeped in American history, it says something that the editors chose to pick a side in this election. According to The Atlantic, voters are really choosing between two very different paths in November, one that will ultimately decide the fate of the country.

More Like This
Here’s How To Fight For Abortion Rights
How To Ask Your Partner For Support When You Need It
Is It Safe To Keep Using Period & Fertility Apps In A Post-Roe America?
Some Movie Theaters Are Banning Teens Dressed In Suits As Part Of Viral 'Minions' Trend