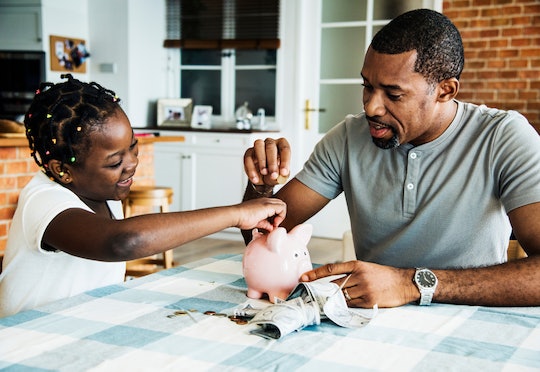 Growing up, you may have earned an allowance for completing a couple of chores around the house like washing dishes, helping set the table, cleaning your room, and more. You might have also been one of the kids who didn't earn an allowance, because it's not like you were the one paying the bills. Either way, you might be wondering if allowances are just a thing of the past, or if American kids still raking in that cash. A new survey revealed that the average allowance for American kids is way higher than you might think. In fact, kids got more of an allowance in 2018 than they did in 2017.

RoosterMoney, a mobile piggy bank and allowance manager app that helps teach kids about money and how to set saving goals, recently released its annual Kids Allowance Report. On its website, RoosterMoney described the report as "a snapshot of the pocket money habits of kids aged 4 through 14 across the U.S."

For the report, RoosterMoney tracked the money habits of 30,000 kids across the United States whose parents are RoosterMoney users, as reported Fatherly reported.

The company found that American kids receive an average annual allowance of $471, according to the report, for an average of $9.06 per week. That puts the average 3.7 percent higher from the $454, or $8.74 per week, that kids reportedly earned in 2017, Fatherly noted.

Researchers found that kids save about 42 percent of their weekly allowance, according to a press release about the study, and most often save up for electronics, such as phones and tablets (although Legos were also really popular).

In a statement, CEO of RoosterMoney Will Carmicheal said:

Starting to engage your kids early by creating teachable moments around money can help cement positive money habits that will stick with kids for a lifetime. The New Year is a great time to kick start things with an allowance and saving routine to encourage your kids to make considered choices about how they use their money.

The app's statement noted that 11-year-olds were found to extremely entrepreneurial. How are you an entrepreneur when you're eleven, you might ask? According to RoosterMoney, they were most likely to boost their income by selling old toys and clothes, averaging $28 per sale.

You have to give those kids major props for finding a way to earn some money at such a young age.

The company's statement also noted that in stark contrast to kids' saving habits, adults only manage to save about 2.4 percent of their income. Although, to be fair, most kids don't have to pay bills or rent. So, maybe adults can be cut a little bit of slack.

Still, it's clear that allowances can help teach kids how to manage their money at a young age. And although the allowance may be higher, maybe that's a good thing! The kids have earned it, after all.