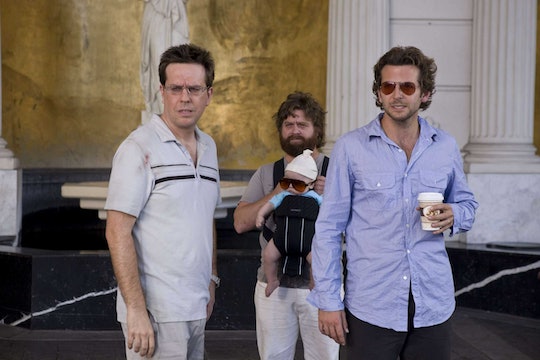 If you want to feel super old, you need to get a glimpse at what the baby from The Hangover looks like now. It's been eight years since the original film premiered, so it shouldn't be such a shock that little Baby Carlos is also eight years older. But kids, right? They grow up so fast!

Pictures of the child actor, Grant Holmquist, have recently been circulating on social media and people are loving it. In the original film, baby Tyler (his "real name" in the movie) was played by Grant and his twin sister, Avery, who is also very grown up. Last winter, their mom posted a picture of the two of them, sans the iconic shades.

The fact that the kids are all grown up shouldn't be too shocking, though. Fans have already seen Grant sort of grown up, when he reprised his role in Hangover III in 2013 as a toddler. Because all of us fans really would have noticed if they didn't use the actual baby from the first one in the subsequent flicks, right?

The film's casting crew officially tried out a few other kids to don some shades and hang out with the Wolfpack in the third installment. But then they realized they were wasting their time, according to Digital Spy. "We called up the mom and said, 'Hey we're doing another one and we would love to see how Grant is doing,'" director Todd Philips told Global Grind back in 2013, as Digital Spy reported. "Then they came to my office and he was great and we had so much fun seeing him again," Philips added.

What a claim to fame, right? Not only will Grant get to brag about being in what's now a pretty classic film (yea, that will make you feel old, too) but he'll forever be remembered for his terrible, terrible table manners.

On social media, fans have long been speculating about what Baby Carlos would look like now, and some people are just now seeing him in the Hangover III.

Since it's possible that not a lot of fans knew that Grant played himself in the third movie or how to find his parents' Instagram account, people seem to wonder about him all the time.

In an interview with The Hollywood Reporter, Ed Helms said that leaving the baby in the car was a "big debate" on set.

Philips added in the same interview with The Hollywood Reporter, "Things were polarizing, like when you hit the baby in the face — even though it's a [stand-in] doll. We hit the baby with the car door, and that bothers a lot of people. Then you have to decide: 'Are we going to leave that in?' Because it also makes The Hangover audacious. We leave the baby in the car, it's 100 degrees, and he goes: 'F*ck it, it's fine. Crack the window.'"

The lunch scene wasn't originally in the script, either. While they were setting up the shot with a doll before filming, Galifianakas reportedly did it to the doll, just goofing off. Philips immediately saw the potential and decided to ask Grant's parents, explaining in the same Hollywood Reporter interview:

I waited for the [baby's] mom to go upstairs because the mom was a little bit more not into stuff like that. I go to the dad: "It would be funny if Zach pretends to do this. Would you have a problem with that?" And he literally goes: "[My wife is] going to be gone for a half-hour. Can you do it in the next half-hour?"

The rest, of course, is history.

More Like This
Rihanna's First Post Since Giving Birth Confirmed She's Performing At The Super Bowl
Post Malone Shared A Bunch Of Sweet & Candid Details About Life With His 4-Month-Old Daughter
Kate Middleton Shares Her Kids' Sweet, Yet Honest Reaction To Seeing Old Photos Of Her
Lindsay Lohan Channels Meredith Blake In Her New Christmas Rom-Com