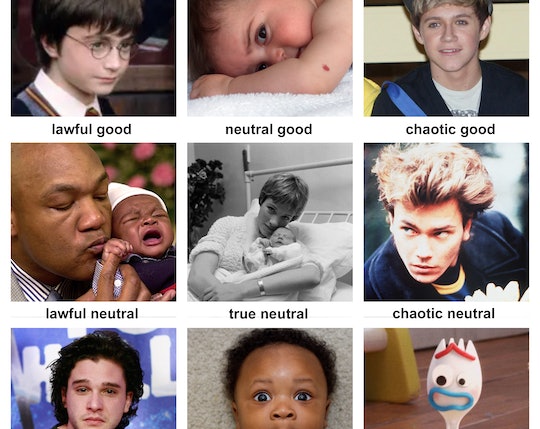 If You Don't Know What To Name Your Baby, Consult This Chart

Do you like baby names that are traditional and regal? Playful and trendy? Meaningful and unique? There are lots of matrices by which you can measure a name… but why not go nerdy with it? A baby name alignment chart may be just what you need to figure this ish out for once and for all.

Baby naming is hard, guys. For some, narrowing down an embarrassment of choices is nearly impossible. For others, despite the endless possibilities, none of them feel quite right. But by measuring names on scales running from good to evil and lawful to chaotic, you can, I hope, at least figure out where your tastes fall. With any luck, this chart will get you on the path to your perfect baby name…

Got it? Now let's unpack things.

These are names some people might consider “boring” but very few consider “bad.” Most people will react to them with something like “I’ve always loved that one!” or “What a good strong name!” or “Awww! That’s my grandfather’s name!” Some things are classic for a reason! These names have withstood the test of time, and have been bestowed upon royalty and commoners alike for hundreds of years.

These names are not only versatile in terms of gender. Take the increasingly popular Avery, for example. Not only can it be a boy or girl name, it can also read as creative or professional, sassy or wholesome, free-spirited or grounded. These names are usually familiar without having too much expectation or baggage associated with them, which is a difficult combination to pull off in the baby-naming game.

*Of course this is relative. Italian speakers have no problem with “Gioia” as it’s their word for “joy,” but English speakers see the literally one ambiguous consonant in a sea of vowels, panic, and timidly guess Gia or Goya (it’s JOY-ah). Similarly, Irish spelling rules are entirely different from English ones, which is how Caoimhe is pronounced “KWEE-vuh.” These complications should never keep you from choosing a name you love, particularly if it’s a way to embrace your heritage and culture… but understand that in a context outside of that culture it’s going to get a bit chaotic.

Examples: “I’m Dorothy. This is my mother Dorothy, and my daughter Dottie.”

In this case the gesture is more important than the name itself, so much so that it can even cancel out even a bad name. Like… it sucks if your name is Herbert or Bertha, but if you’re named after someone, well, that kind of makes it a little bit better. Just ask George Foreman. (p.s. Some names deserve comebacks… Bertha and Herbert are not among them.)

These have been top two names for the past five years now and, as such, are what we have to measure all other contemporary names against. Love them, like them, or hate them, they’re our contemporary default.

Often inspired by nature, these names may initially take you aback (“What? You can’t name your baby North! That’s not a name, it’s a direction!”) but after you sit with it a minute you think “You know, I actually really like that! Why can’t Winter be a name?” Why not indeed, friends? All names were made up at some point! You make your own rules! Wheee!

Lawful Evil: Giving Your Child A Name You Never Call Them

Example: “Why does your license say Alvin?” “That’s my name.” “What?! Why does everyone call you Billy?” “My middle name is William and my parents have only ever called me Billy.”

I feel like everyone knows a person who has done some version of this, and while I’m sure families all have their reasons for doing what they do, those reasons rarely make sense to outsiders. But, like, you can do this. You aren’t breaking any rules or anything… but it’s a very weird thing to do. It’s no skin off anyone’s nose really… but what’s up with this?

Neutral Evil: Names That Pair Poorly With Your Last Name

I don’t care if you’ve always loved the name “Jack” — if your last name is “Hoff” you have to pick a different name to love. Fortunately there’s an entire world full of them! As such, if you go with one you know is going to embarrass your kid, that’s just evil. Here’s the thing: when you give your child a joke name, the joke is on them… all the time. Forever. Just don’t do it.

Example: Abcde… that’s not a typo

In 2018, this name (pronounced AB-sih-dee) made headlines when a Southwest Airlines employee was overheard mocking a 5-year-old passenger named Abcde, which of course isn’t cool… but I really haven’t stopped thinking about that name since. Particularly when I learned that no fewer than 374 women in America currently have that name. Abcde. Abcde. Abcde. It has driven me to madness. I find myself at 3 a.m. asking questions like “What are letters? What are names? Do words even exist?”