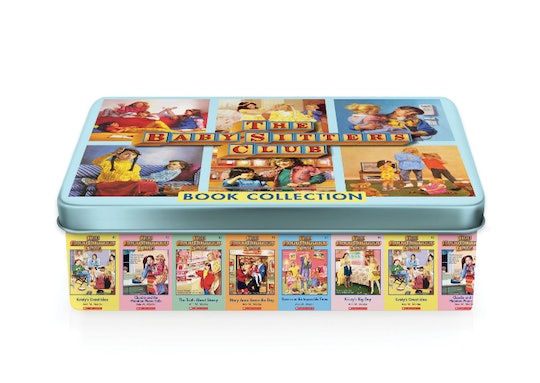 'The Baby-Sitters Club' Books Are Coming Back, & OMG *This* Is Kristy's Great Idea

Whether you related to founding member Kristy Thomas and her class president ways, coveted Dawn Schafer's California looks, or simply adored Claudia Kishi's creativity and eccentric wardrobe, the core of your affection is simple: You were a die-hard The Baby-Sitters Club fan. I'm not going to lie, I recently scored the first three books at a used book sale and it was akin to other women's thrill at the sight of a Nordstrom shoe sale. That's why I am kind of peeing my pants about this recent news: The Baby-Sitters Club books are being released in a collectible tin.

As if a BSC fan needed any further reason to freak out over having the first six original covers in their hands, the books (breathe in, breathe out) come in a collectible tin that is decorated with all of the BSC nostalgia you could hope for, including well-known images of bratty kids sticking their tongues out at a jean shirt-clad Dawn, and Mary Anne wearing her signature braids while taking Jenny Prezzioso's temperature. (Um, you should know that it was 104 degrees and — in case you can't tell by the title of the book — Mary Anne saves the day by calling 911.)

According to BSC author Ann M. Martin's Facebook page, the books and tin will be available this summer. "So excited to share this news with BSC fans! Coming this August 28th, BSC books #1-6 will be available — with the classic covers — in this retro tin!" Martin wrote. "Pre-order now from Amazon, Barnes & Noble, or your favorite indie bookstore. I can't wait!"

We really can't either, Ann. Truly.

In case you need to be reminded about exactly what those six titles in the tin are, you can expect the following hits:

But, honestly, you couldn't have ever forgotten, could you?

Scholastic also announced the upcoming release on their Instagram page and suffice it to say fans are a tad excited about the throwback collection. Commenter @jnstephenson4 even wrote, "YES!!!!!!! I need this in a bad way!! I can put it next to my Baby Sitters Club game, Barbie dolls and postcard book!!!!!!! 😍😍😍"

And everyone everywhere was like, sister, we hear you, see you, and are right there with you.

Other commenters said they were excited to buy the collection for their kids, but some were quick to admit that the little ones were a cover. @marieledeaux got real and wrote, "Going to say that I am buying this set for Isabelle when she gets to a reading age for these, in 4/5 more years, but in reality it will be for me to re-read and pretend I'm back in the 5th/6th grade again."

If you're a child of the '80s, then you probably know that The Baby-Sitters Club series was released in 1986 with Kristy's Great Idea. The series was initially supposed to be just four books, but the first few were so successful that more followed. When it was all said and done, the series consisted of approximately 250 titles, including a prequel, The Summer Before, as well as Mysteries, Super Specials, and the Little Sister and Friends Forever franchises, according to The Atlantic. A television show and film were also created, and four of the books were made into graphic novels by Raina Telgemeier.

Now all we can do is hope that the hype for this collectible series leads to the rumored revival of a television series because my goodness, my daughter really needs it to happen.

More Like This
The 35 Top Toys For 3-Year-Olds
60 Bits Of Christmas Trivia To Delight Your Friends & Family
Snap A Pic Of Santa In Your Living Room With These Free Apps
Here’s Why Your Vagina Itches At Night, According To Experts