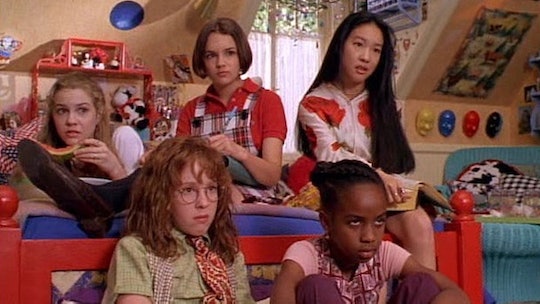 Nostalgia fever in entertainment is still running strong. Over the past couple of years, we've seen revivals of so many of our favorite shows from the 90s and early 2000s, revisiting the characters as they would be present-day, and catching up like we're old friends. Well, get ready to return to Stoneybrook, Connecticut, too, because The Baby-Sitters Club is coming to Netflix as a series, and honestly, it's about time.

On Thursday, Netflix announced it has ordered live-action episodes based on the book series, according to a press release. Though we don't yet know when it will be released or who will be starring in it (but we'll hold our breaths until we do, trust) we do know that it looks promising, given that Chronicles of Narnia producers Walden Media and Michael DeLuca, as well as Lucy Kitada and Ann M. Martin will be heading the project. In addition, we know that Rachel Shukert will be the showrunner, and Lucia Aniello will direct.

“I’m amazed that there are so many passionate fans of The Baby-Sitters Club after all these years, and I’m honored to continue to hear from readers — now grown, who have become writers, editors, teachers, librarians, filmmakers — who say that they see a reflection of themselves in the characters of Kristy and her friends. Ann M. Martin, who wrote the series and will also be an executive producer of the show, told Deadline. "So I’m very excited about the forthcoming series on Netflix, which I hope will inspire a new generation of readers and leaders everywhere."

Of course, it's not the first time we've seen Kristy Thomas, Mary Anne Spier, Claudia Kishi, Stacey McGill, and Dawn Schafer on screen. After the series was such a hit in the early to mid-90s, the series was made into a movie, which was released in 1995.

Though we don't know whether the show will be following the exact plot points from the show or if it will simply just involve the characters getting into different scenarios (think Sabrina, as opposed to Gilmore Girls) but we do know that it will, at least, be similar.

In the press release that announced the news, Melissa Cobb, the Vice President of Kids & Family at Netflix explained that the "themes of The Baby-Sitters Club still resonate 30 years after the original book series was released and there has never been a more opportune time to tell an aspirational story about empowering young female entrepreneurs."

She went on to say that their goal is to make the story modern, while still honoring the original characters that are so beloved. Cobb said, "Together with Ann M. Martin and the team at Walden Media, our ambition is to contemporize the storylines and adventures of this iconic group of girlfriends to reflect modern-day issues."

Be all of that as it is, it should probably go without saying that people are justifiably excited, as most tend to be when it comes to anything to do with intense nostalgia.

Though there are so many details yet to be disclosed (and you better believe we'll be watching the news closely to see who gets cast) it's exciting to know there's such an amazing thing to start looking forward to.