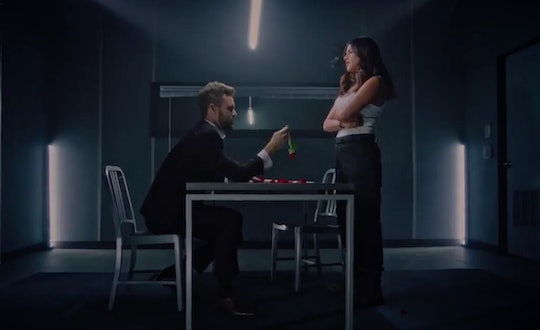 These 'Bachelor’ & ‘Quantico’ Promos Are Perfect

ABC moved their hit show Quantico to the time shot after The Bachelor on Monday nights – and they found the perfect way to let us know. Throughout the show, crossover promos between the two featuring Bachelor Nick and actress Priyanka Chopra aired. They weren't just boring previews where they talk to the camera and tease us about the line-up. Rather, both were in character (well, as in character as Nick can be) and excited about the other's show. The Bachelor and Quantico crossover promos were delightfully perfect.

Quantico follows Alex Parrish, played by Chopra. She's an FBI agent who then goes to work for the CIA – basically, she's a professional badass. Until now, the show aired on Sunday nights, but after returning from winter hiatus it's slated for Mondays after The Bachelor. To announce this, ABC decided to air some clever previews.

In one, Alex appears to interrupt a confessional Nick is having at the mansion. "It’s going to be so difficult to make a decision," he laments. Oh, we know, Nick. He answers the door to find Alex and tells her that they're a few weeks into the show and can't add another contestant. Pretty presumptuous, but that's Nick for you.

"I’m not here to be a bachelorette," Alex tells him. "I’m here for the right reasons." She seems to have her Bachelor language down, but nonetheless – she is not here for Nick's heart. "I’m your new neighbor, every Monday." She then tells Nick they're going to be best friends. We hope she keeps to that promise, but we have our doubts.

In the second promo, Nick and Alex have a less amicable relationship. They're in an interrogation room, with Alex questioning Nick:

Nick says he can't tell her how the season ends, and begs her not to hurt him. He then does the only thing he can do: offers her a rose. Alex gawks, "Are you really gonna try that on me?" Well, that move probably would've worked on us. We love that The Bachelor and Quantico are now "neighboring" shows, and we may love these promos just as much.