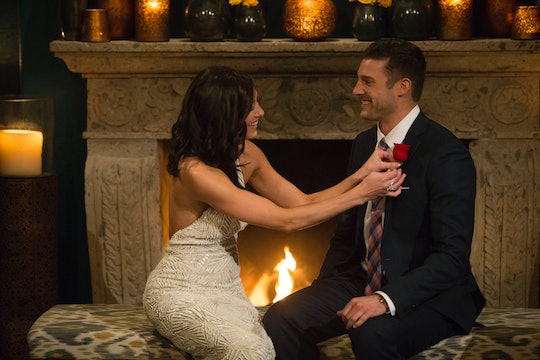 'Bachelorette' Becca Had A Surprising Response To Garrett's Controversy

There is always some type of drama that happens on The Bachelorette — either real or producer-manufactured — but it doesn't usually happen on night one, outside the show. This is, unfortunately, what happened with Becca. Becca's response to Garrett's Instagram is not what fans expected at all, and it's making them wonder what the outcome of the show will be.

Garrett was a frontrunner from the beginning because he got the coveted first impression rose. On The Bachelorette, this is a big deal: the last three Bachelorettes all ended up choosing the man they gave their first impression roses to ( Kaitlyn Bristowe and Sean Booth; Jojo Fletcher and Jordan Rodgers, and Rachel Lindsay and Bryan Abasolo). In her blog for People, Becca explained why she gave Garrett the rose: "After Garrett’s clever and charming entrance, fly-fishing and easy conversation, I knew he’d be someone I hoped would be around for a while."

Well, that same night, HuffPost reported that Garrett "liked" social media posts targeting immigrants and Parkland shooting victims. That wasn't all; some posts he allegedly "liked" were sexist, racist, transphobic... I could go on. Regardless, it soon turned into a sh*it storm, especially because this wasn't just some contestant that was booted off night one — he won the first impression rose! Garrett not only remade a brand new Instagram, but his first post was a long apology:

"I am sorry to those who I offended, and I also take full responsibility for my 'likes' on Instagram that were hurtful and offensive. garrett_yrigs12 was my former Instagram handle and I decided to take it down and start fresh because I have learned an extremely valuable lesson and am taking steps to grow, become more educated, and be a better version of myself," he explained. "I am not perfect, and I will never be anywhere close, but now I will always be more informed and aware of what I am liking and supporting, not just on Instagram, but in life."

Garrett said those posts weren't who he really was, and he apologized for offending fans. Becca responded to the controversy in an interview with ET: "I want viewers to be open to everyone, and I want them to go through this season with me and watch my love story unfold with all of these men... because that's how I went into this journey," she said. "I did things in the past that I'm sure wasn't the best thing, but I just want people to stay open-minded to everyone."

Becca also said that everyone is allowed to believe what they want. She continued, "I can't fault on anyone for what they believe and who's to say that anyone is truly what they believe in if they just double tap ... I can't speak to that because that's just not me. I am a strong woman and I do believe in certain things, but again, that's what's so great about our country — everyone is entitled to their own opinions." When Becca says she believes in certain things, she's referring to her support of Hillary Clinton and the women's march.

Garrett's not the first contestant to come under fire for his social media posts. Lee Garrett was also under fire for racist and sexist posts last year, and Rachel told him during the Men Tell All special, "You turned it into something so ugly ... I didn’t want to give any life into you, your opinions or your brief time on the show." Now, this was after the show ended, but Rachel didn't make a statement saying Lee could "believe what he wants to believe" like Becca did.

Considering Becca's response and Garrett's swift deleting and remaking his Instagram, fans are suspect that Garrett may actually win this whole thing. I'm not sure if the response warrants that speculation, but it's... interesting, to say the least. I'm excited to see where this season goes and if Becca really chooses Garrett.