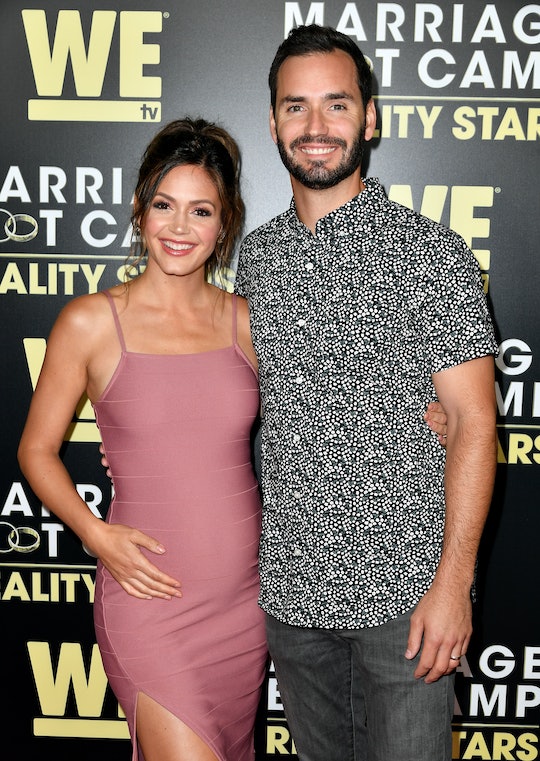 'The Bachelorette's Desiree Hartsock Just Got Real About The Fourth Trimester

Former Bachelorette Desiree Hartsock and her husband, Chris Siegfried, recently welcomed their second child together —an 8 pound 2 ounce baby boy named Zander Cruz — and naturally that's meant that Hartsock's already-gorgeous Instagram account is now home to some seriously cute newborn photos. But as much as the new mom-of-two may have made pregnancy look super glamorous, she definitely isn't trying to sugar-coat the reality of the postpartum period. In fact, The Bachelorette's Desiree Hartsock posted a postpartum selfie to social media Thursday, according to Us Weekly, and in it, she opened up about about why giving birth is far from being the end of a woman's pregnancy experience.

Hartsock posted a bathroom mirror selfie of herself taken just four days after delivering her son, and in it, she showed off her postpartum body in only a nursing bra — including her still-pregnant-looking belly. If you've never given birth before, that might be somewhat surprising, but it's also why it's a big deal that women like Hartsock are willing to get real about what the days after delivery are really like. In her caption, she wrote that while she's "not typically one to document or especially share body image pics," she felt empowered having seen others do it, and quipped, "so here I am [four] days postpartum looking like I'm still pregnant but feeling like a supermodel/warrior."

Harsock's message went beyond simply showing off what an actual postpartum belly might look like though. In the post, she also took a moment to reflect on what's known as the "fourth trimester." While it may take three trimesters to carry a baby, the fourth trimester describes the period of time needed by both moms and babies to actually adjust to life after pregnancy itself.

According to The Bump, the idea of the fourth trimester originated as a way of explaining the developmental stage an infant goes through as it gets used to being outside of the womb, particularly in light of the fact that, when babies are born, they aren't actually quite ready to exist in the world the way that other primate babies are after longer gestational periods. But the idea of the fourth trimester is also significant for moms too: as Hartsock noted, "there's so much healing and recovery that needs to take place physically and mentally" after a woman delivers a child, and it's an idea that need to be taken more seriously.

For one, well, as Hartsock's selfie proves, your belly definitely doesn't go away immediately: according to WebMD, it actually takes around 6-8 weeks for a woman's uterus to shrink back to its pre-pregnancy size. There are other early-days physical effects too — think, labor afterpains, breast engorgement, post-delivery night sweats, and vaginal bleeding. And that's just for a complication-free, straightforward birth experience.

In fact, in 2012, Salford University's Dr. Julie Wray told The Daily Mail that, while six to eight weeks is usually the general length of assumed postpartum recovery time, in reality, it's much more realistic to expect it to take around a year.

Taking it slow and easy definitely sounds like an approach Hartsock wants to get behind, though. In her post, she encouraged women to be gentle with themselves, and wrote,

As a society we need to embrace the beauty of the body during this time and not expect a new mom to just 'bounce' back like her body didn't just go through battle. It's feeling beautiful and courageous in our own skin no matter the stretch marks, extra weight and whatever else is going on. Grace upon grace upon grace ... for ourselves and each other.

At a time when Instagram seems full of gorgeous pregnant women with perfectly-curated feeds, who somehow seem to return to their glamorous pre-baby selves five minutes after delivering their babies, it's easy to fall into the trap of holding ourselves to extremely unrealistic expectations — particularly at a time when we're already feeling sensitive, emotional, and majorly sleep-deprived.

Although Hartsock still honestly looks fantastic only four days out from welcoming her second child, her message is one that matters, and one which should be something all women get to hear. While it may be nice to hope that the immediate postpartum period will be one of joy and unbridled love and and happiness, the reality may be much messier and more complicated. And if it is? It's completely OK.