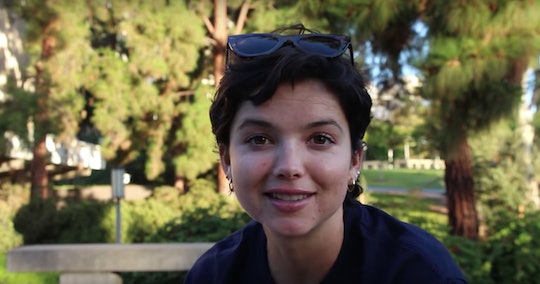 A lot has changed for Bekah Martinez since she competed on Arie Luyendyk Jr.'s season of The Bachelor, but she's kept fans apprised of all of the goings on through Instagram and regular YouTube videos. Her most recent video is a candid account about going back to college while pregnant and why she made the decision to do it now.

In the video, Martinez explains that she attended the University of California, Irvine for a couple of years after high school, but dropped out before graduating while going through a rough time in her life. She then was planning to go back last fall, but, of course, ended up as a member of the cast of The Bachelor, and headed to the mansion to film instead. Originally an English major, Martinez discovered that she was actually pretty close to an art degree instead.

"I actually decided I was going to go back to school when I found out I was pregnant, like, it was one of the first things I thought," Martinez said in the video. "I was like, 'You know what? I need to bite the bullet and re-enroll.'"

She went on to note that getting her degree was always something she intended to do at some point in the future and thinks that now is a great time to accomplish that goal.

Martinez also explained that since she now makes a lot of her money doing social media ads and things like that, she'll actually have more time to devote to her schoolwork and preparing for the baby, since she won't have to spend as much time working as she did the last time around.

She posted about the video on Instagram, writing, "Mama’s gonna finish that degree! UCI’s on the quarter system which is why I’m starting so late. Being back in college (especially pregnant) feels WEIRD. I feel a little self-conscious, but I’m soooooo grateful to go back to school. I’m so lucky to have access to higher education and I love to learn."

Fans and followers responded with support, with one commenting, "These are power moves and I’m here for it... congrats! Already doing the best for baby and she ain’t even here yet 💕."

"I finished my degree while pregnant," wrote another commenter. "Great role model to your child some day. You can say you mom did it you can too!"

"It’s never too late to go back and it is always something to be proud of! You go, mama!" wrote a third.

The mom-to-be announced her pregnancy in an exclusive interview with PureWow earlier this month and noted in her back-to-school video that her due date is Jan. 29, 2019. Thus far, she's shared a bit about her pregnancy on Instagram and has published several videos on YouTube. For example, in a video she recorded when she was about 21 weeks pregnant, she said that she thinks the baby will be late and that she felt a bit insecure with how her body was changing before she clearly looked pregnant.

As this busy mama heads back to class, it remains to be seen just how much she'll continue to share, though Us Weekly reported that Martinez plans to release more pregnancy updates. It's clear that this year is going to be pretty exciting — and pretty life-changing — for this member of Bachelor Nation.

There are a lot of big things headed her way, but Martinez seems to be embracing all of the new experiences.