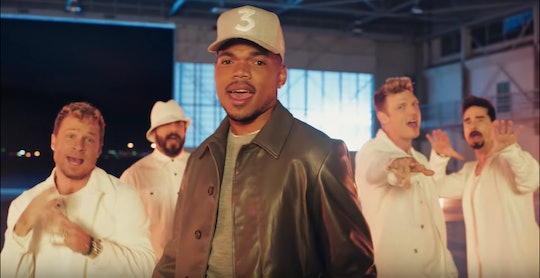 True connoisseurs of the Super Bowl commercial genre know that Doritos consistently puts on one of the most anticipated Super Bowl spots of the night. But this year, the company really outdid themselves, bringing together two seemingly disparate sounds into one delicious TV snack. On Sunday, the Backstreet Boys and Chance the Rapper's Super Bowl commercial debuted a Flamin' Hot remix of a late-'90s classic.

The iconic "I Want It That Way" music video — which TRL enthusiasts of a certain age will recall shot in an airplane hangar and featured the five members of BSB in all-white ensembles — first came out in 1999. As any math whizzes among us may have put together, that means "I Want It That Way" turns 20 years old this year. It was a perfect opportunity for Doritos to scoop up the band, the song, and the music video's memorable imagery for a modern remix.

The commercial itself is for Doritos' new Flamin' Hot Nacho flavor, a big bag of which Chance is munching on at the top of the Super Bowl spot while sitting in an airplane hangar. "Flamin Hot Nacho?" he muses in a voiceover. "They made the original hot?" The next thing we know, flashy pink and purple cars peel up to a runway, delivering Chance and a bone breaking dance crew to a neon sunset painted airplane. You can guess where this is going.

In a brightly colored play on the muted tones of BSB's melancholy ballad, Chance raps a few bars in homage to Doritos' new flavor ("Hotter than a pot roast / fingers on my hot chips / red-handed, come on, man, I'ma need some chop sticks"). And as the beat drops, "I Want It That Way's" chorus kicks in with the original members of BSB – back in those crisp white outfits — dancing yet again in that airplane hangar. Chance joins them as they sing and do synchronized boy band choreography, so if you were a fan of his moves in Francis and the Lights' "May I Have This Dance?" video, get ready for another taste. He even briefly joins in to sing along with Nick Carter's catchy chorus lead, which, I promise you, is everything you never knew you needed.

The commercial that aired during the Super Bowl was only 30 seconds long, but Doritos quickly tweeted out the full-length, minute-long video for viewers to check out. While the risk of all this turning out super cheesy was assuredly high, it somehow all came together and was actually super fun? The members of BSB can still bust a move 20 years later, though it's worth noting that they traded in "I Want It That Way's" original choreography for a more hip-hop infused update. And Chance seemed to be having a genuinely good time! The commercial finally ends on the tagline "The Original: Now It's Hot," nodding to both BSB's classic and Chance's distinctly updated lyrics and aesthetic. It was a pretty genius collaboration between one of the first bands young millennials latched onto in the late-'90s, and one of the generation's most prolific grown-up stars.