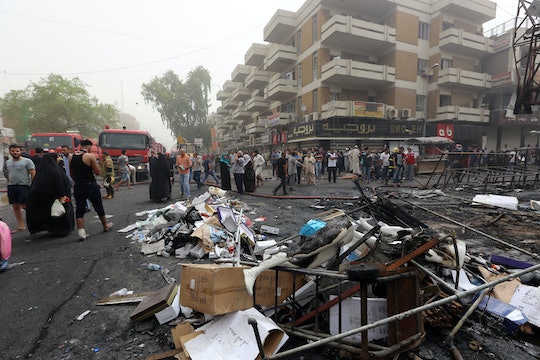 On the evening of June 3, a car bomb went off in the Karrada district of Baghdad just after Muslim Ramadan fasting ended for the day. People had flooded the busy area's markets to shop, and 125 people were killed in the ensuing explosion. Later, near midnight, a second car bomb went off just north of Baghdad, killing another five. The Karrada explosion was Iraq's deadliest bombing this year, and it should serve as a reminder to some that equating ISIS with Islam is not only inaccurate and prejudiced — it's dangerous.

After too many devastating terrorist attacks in the past couple of years (with many of them claimed by ISIS), a growing wave of Islamophobia and racism has taken hold in the United States. A Public Religion Research Institute survey last year showed that the majority of Americans (56 percent of them) now believe that "the values of Islam are at odds with American values and way of life."

That's a pretty hefty chunk of Americans who are grappling with their feelings toward Muslims (unfortunately, that sentiment isn't contained between American borders, either). However, blaming Muslims for terrorist attacks or for the existence of ISIS is inaccurate. While perhaps ISIS subscribes to an extreme version of Islam, make no mistake: The biggest victims of the war they're waging have, overall, been Muslim, and over 60 percent of terrorism-induced fatalities have occurred in predominantly Muslim countries. If ISIS' issue were simply with the Western world's beliefs, killing Muslims would be a rather counterintuitive approach. If you take a look at ISIS' widespread attacks, grouping Muslims in with ISIS simply doesn't make sense.

Not only is that xenophobia inaccurate, it's dangerous. As national security journalist Loren Thompson wrote for Forbes:

Hitler’s early appeal to alienated young males in the beer halls of Munich — the notion of a thousand-year Reich, the need for lebensraum, the scapegoating of Jews, the rejection of cosmopolitan values – was similar to the appeals that ISIS issues today. ... If we focus too closely on the Islamic features of what ISIS leaders propound, we will miss the underlying motivational dynamics that explain why such movements have similar success at recruiting even when they espouse completely opposite ideas.

Attacks like the one that occurred in Karrada on Sunday are fierce reminders that ISIS is an equal-opportunity terrorist organization, and nobody is off-limits. Muslims are ISIS' most targeted victims, and now, more than ever, is a time to work together, support one another, and create stronger bonds to overcome ISIS' threat.