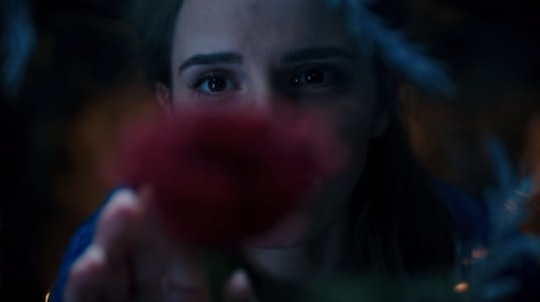 The Disney animated classic Beauty and the Beast is getting the live-action treatment and today fans were treated to their very first look. Yep, the Beauty and the Beast trailer is finally here and Emma Watson really is the perfect Belle. When it comes to classic beauty, Watson has plenty to spare and I can't wait to see her bring Belle to life.

The best part about this live-action Beauty and the Beast production is that, unlike other live-action Disney remakes like Cinderella and Maleficent, Cinema Blend reported this movie will include all the original musical numbers. And with a cast including Broadway star Audra McDonald as Madame Garderobe, Kevin Kline as Maurice, Ewan McGregor as Lumiere, Emma Thompson as Mrs. Potts the teapot, Stanley Tucci as Maestro Cadenza, and Ian McKellen as Cogsworth, it's easy to get excited about what this ensemble with be able to do with some of the more memorable numbers, like "Be Our Guest."

One of Watson's most well known recent roles has been that of feminist activist, namely as a Goodwill Ambassador for women for the United Nations. So it was kind of strange to hear that the prominent feminist warrior would take on a retro princess role. But Cinema Blend tries to make the argument that Belle is the most feminist of all the Disney Princesses because she likes books. I have a hard time agreeing that liking books equals feminism, but I'm willing to give Watson the benefit of the doubt that she'll be able to play a more empowered Belle than we've ever seen before.

Take a look at the trailer. It's really hauntingly beautiful.

It really is amazing how Disney is able to bring these cartoon fantasies to life. I mean the castle, complete with chandeliers and ballroom, looks exactly like it did as a cartoon, almost without losing any of the dreamy quality. Amazing. I'm dying to see more.

The movie will be released on March 17, 2017. And by the reaction on social media, there's plenty of excitement about the upcoming release. Mostly though, everyone is just dying to see Waston as Belle.

The big question will be about how Emma handles a roll in a full-blown legacy musical. Although she did a pretty great beat box for gender equality along with Hamilton's Lin-Manuel Miranda recently...

So if she can pull of an impromptu beat box, surely Watson will nail Belle's singing and dancing numbers, right? We'll have to wait until March 2017 to know for sure. But, with a trailer like this, Beauty and the Beast is likely to live up to most of the hype.