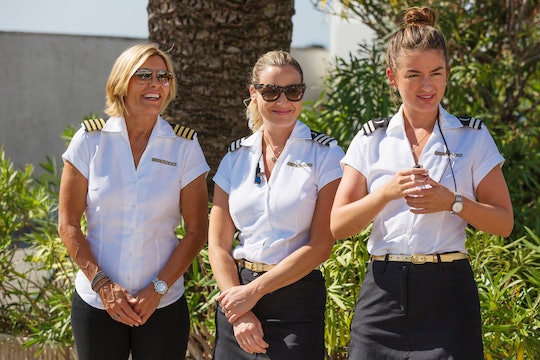 When Below Deck Mediterranean returns to Bravo for Season 4 on Jun. 3, the crew of Cap'n Sandy's yacht will be cruising through the South of France. You can expect gorgeous scenery, bungled French, and all the drama that comes from enclosing several people on a boat in the middle of the sea. Many cast members are returning, but there will be some new faces as well. So say bonjour to the Below Deck Mediterranean cast for Season 4. You'll get to know them a lot better in the next few weeks, but why not make introductions now?

Three crew members will be back to join Captain Sandy on this latest voyage, though she hasn't always had positive interactions with all of them. Deckhands João Franco and Colin Macy-O'Toole are going to sail the high seas once again, though João has had a promotion: he's now a bosun, which gives him more responsibility over the boat's equipment and the rest of the crew. Chief stew Hannah Ferrier returns as well, despite the fact that she and Sandy have clashed before. Per People, Hannah tries to smooth things over in Season 4, though she doesn't always succeed.

But those are only a few of the cast and crew who will be sailing along on the Sirocco. Without further ado, here's everyone you'll be spending this season of Below Deck Med with.