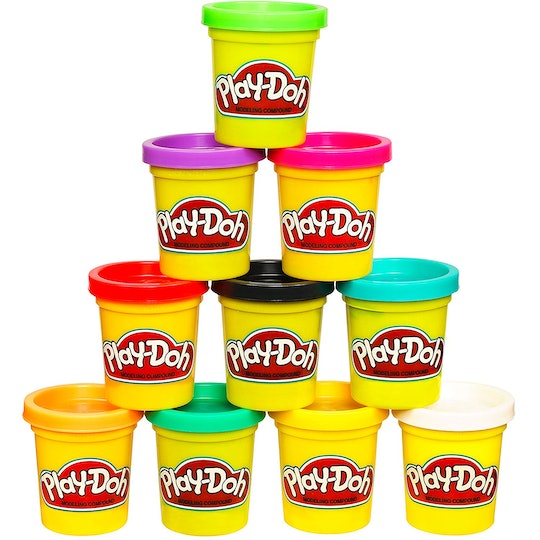 This Sunday, Sept. 16, is World Play-Doh Day, and I truly cannot think of a childhood staple more deserving of its own holiday. Seriously, who doesn't get nostalgic when they smell those little yellow Play-Doh tubs? In honor of the iconic, 60-year-old past-time, Hasbro is hosting an entire Play-Doh weekend — kicking off Sept. 14 — and they're encouraging Play-Doh enthusiasts of all ages to take part. To get you in the spirit, we're bringing you everything you want to know about the benefits of Play-Doh on World Play-Doh Day. Grab your Play-Doh (and your child, if you really need an excuse to play with it) and let's celebrate!

If you have any doubt about Play-Doh's popularity, consider this: the holiday began in 2006 as National Play-Doh Day, but the love for the brand was too widespread to be contained in the United States. By 2015, it was officially World Play-Doh Day, which is much more appropriate for the beloved product. In fact, a representative from Play-Doh told Romper that in 2017, Play-Doh was the number one product in the Arts & Crafts category in the U.S., the U.K., France, Germany, Italy, Spain, Russia, Mexico, Canada, and Australia. Additionally, the Play-Doh brand has shipped over 4.5 billion cans worldwide since 1956. In other words, when there are barriers created by language, religion, upbringing, and so on... just try whipping out a tub of Play-Doh. Apparently, it's universal.

Before there were the 50+ colors of Play-Doh you can find today, there were four: red, blue, yellow, and white. In fact, according to this article by AdWeek, Play-Doh was originally sold as a "gummy, doughy product that housewives used to remove coal soot from wallpaper." A lightbulb went off in creator Joseph McVicker's head after his sister-in-law allowed her students to play with the dough in class, and it's been sold as a children's toy ever since. And, because it's made of primarily water, salt, and flour, it's complete nontoxic, too.

Parents and teachers alike have found benefits for Play-Doh beyond its entertainment value. Caroline D'Antoni, a second grade teacher in Indiana, was amazed to see how it can help children focus. "We've used Play-Doh with a kiddo who couldn't seem to sit still and pay attention. When he had Play-Doh in front of him, he would sit quietly and use it really respectfully. It really helped him focus," D'Antoni explained to Romper. Leah Padlo, step-mom to 3-year-old Jayla, agrees. "Play-Doh is very therapeutic for her. It makes her focus on something else and it makes her chill," Padlo tells Romper.

And guess what? Turns out, people are never too old to find Play-Doh mesmerizing. Katie Longman, a manager of internal events and employee engagement, actually uses Play-Doh to help adults focus, too. "I've hosted hundreds of meetings for thousands of people using Play-Doh and coloring books in the centerpiece. Ample research shows that fidgeting actually helps you pay attention. I call them sensory boxes," Longman tells Romper.

When I was young, I spent hours playing with Play-Doh simply because it's fun. I used to have all the contraptions that would turn Play-Doh into strings of spaghetti, and I loved making colorful coil pots (just to promptly smash them immediately afterwards). However, mental health professionals have found incredible purpose for Play-Doh, far beyond how I used it back in the day. Miranda Smith, a mental health therapist based in Louisville, Kentucky, actually uses Play-Doh during her therapy sessions to help put kids at ease. "I allow kids and teens to use Play-Doh while in therapy sessions and sometimes I find it allows them to put down their defenses," Smith tells Romper. "A kid who can’t share while making eye contact can turn into an open book if his or her hands are busy."

For Cara McGarry, a Chicago-based pediatric speech-language pathologist, Play-Doh has become an invaluable tool for for language stimulation. McGarry uses the product to elicit requests from children — "Help me open" and "more Play-Doh" — help them make choices — "red Play-Doh or green Play-Doh?" — and label their actions — "roll, squish, cut, peel," and so on. "I just finished using Play-Doh to represent cookie dough and acting out a multi-step sequence, and following directions to roll, cut, bake, take out, and eat," McGarry tells Romper. "We love Play-Doh!" While millions of people create with Play-Doh simply to have a little fun, it's become an incredible tool for those working with children in different capacities over the years (and that's given us another reason to adore the stuff).

According to a representative from Play-Doh, children in over 80 different countries around the globe love playing with their product. For Rachel Townzen, a paralegal at a nonprofit providing immigration legal services for unaccompanied youth, Play-Doh is a comfort for children seeking asylum in the U.S. "To apply for asylum, you need to tell your story to a lawyer, and then again in an interview before an immigration officer, and you need to prove that you have a well-founded fear of returning to your country," Townzen explains to Romper. "It’s scary both going to the interview and telling their stories, so we give them toys to keep their hands busy. We started using Play-Doh and it’s the clear favorite. It just helps so much with the anxiety."

Play-Doh has been a popular and well-loved product for decades — and it's not going anywhere. However, a product that can be so much fun while having such widespread benefits for children and adults across the globe is truly in a league of its own. Celebrate World Play-Doh Day this weekend, and make sure to tag your photos using #WORLDPLAYDOHDAY.