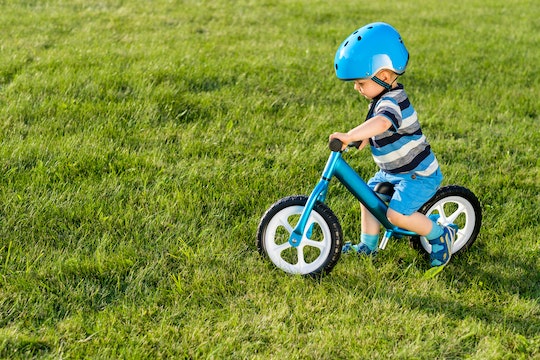 Learning how to ride a bike is one of those classic childhood milestones lots of parents start looking forward to before their kids can even walk. Back in the day, the process pretty much always involved starting out with training wheels... but training wheels don't give kids a chance to learn how to balance on their own. That's why balance bikes have become so popular in recent years: They have no pedals, so kids focus on learning to stay steady. But when is the best time to start your toddler on a balance bike?

Most kids aren't ready to take on a traditional two-wheeler until they're out of the toddler phase, according to Better Homes & Gardens:

"There's no set age for taking off on two wheels, but usually by 4 or 5 years of age children have enough balance and coordination," the BH&G article stated, at which point they've likely mastered the art of riding a tricycle. But with a balance bike, kids can start much younger, as there's less of a chance they'll topple over. In fact, the website for the balance bike company FirstBIKE recommends starting your child's cycling lessons at the tender age of 2 — but added that they've seen "many skillful children riding on a FirstBIKE at the age of 22 months" (which is pretty amazing considering lots of kids can't even figure out the mechanics of a tricycle at that point). The earlier they master the art of riding a balance bike, the sooner kids are likely to ride a two-wheeler with no problems.

It makes sense: Tricycles and bikes with training wheels only give your kid the chance to practice pedaling, not staying upright. And it's that second part that most beginner bikers have trouble with.

“The hardest part about learning to bike isn't pedaling, it's balancing,” Chris Cassidy, communications director for The San Francisco Bicycle Coalition told NBC News. “Training wheels are a thing of the past.”

As Dr. Tara Cancellaro explained (also to NBC News), the skills associated with balancing and pedaling come from different parts of the brain, so they'll learn more quickly and with less injuries if they can work on one skill at a time in isolation. And even if it seems like all the other kids at the playground are taking off on two wheels, it's important not to push your child to learn if she doesn't want to or doesn't seem ready.

“Waiting until your child is ready and motivated to learn is really important,” said Cancelaro. “Don’t use a glider bike just to pressure your kid to do it faster than the neighbor.”

There are lots of different balance bike options on the market, and while they're not particularly cheap (most range from around $70 to $200, according to this breakdown from Two Wheeling Tots), balance bike fans believe they're worth the money. As cycling instructor Ben Sherratt pointed out to Lifehacker, a potentially cheaper option is to simply remove the pedals from a small two-wheeler and lower the seat (then when your kid is ready, you can just put the pedals back on).

Either way, Sherratt recommends teaching your little one "giant steps" and "kangaroo hops" to get the hang of moving forward on the bike: Giant steps are exactly what they sound like (Sherratt even shouts “Fee-fi-fo-fum!” so kids can pretend they're a real giant taking enormous steps); “kangaroo hops” are long, smooth glides. Of course, there's no one way for your kid to get comfortable with the process — this video from Global Cycling Network breaks it down in easy-to-follow fashion:

The most important thing, of course, is that your child always wears a helmet no matter what kind of bike she's riding (even if it doesn't have pedals!). Making sure she gets in the habit now is essential for a lifetime of safe cycling.