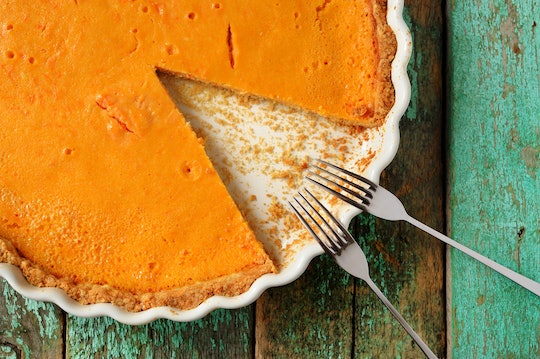 Pies are the best part of Thanksgiving. And although all forms of this crust-plus-filling holiday staple are delicious, pairing the best alcohol to drink with pumpkin pie will take your favorite seasonal dessert to the next level. These drink selections are intended to complement the flavor of the pie — not compete with it — for a magical tasting experience.

The best part is that there's a drink from every alcohol category to suit your pie's needs, but the winning option is rum. "Rum (Goslings, Captain Morgan) is a reasonable spirits choice," said Ben Narasin of Wine Enthusiast. And because there are plenty of recipes for pumpkin-spiced rum, as well as rum-spiked pumpkin pie, it looks like these two flavors are made for one another. To increase the warmth and coziness, try this recipe for hot buttered rum, as noted in Liquor.com. It's the toastiest pie and drink pairing of them all.

If you're more housewife than mixologist, the wine options for pie are almost endless. Sweet Rieslings, sparkling wines, and ice wines all pair well with pumpkin pie, according to Wine Enthusiast. Wines that are sweet but not overpowering are key. A raisin sherry or an Australian tawny port would also play well with pumpkin pie, according to food and wine writer Fiona Beckett from Matching Food & Wine. Essentially, any wine that is crisp, chilled, and fit for dessert will work with your favorite post-turkey dish.

Want a specific bottle recommendation? Sommelier Yannick Benajmin recommends pairing your pumpkin flavors with 2012 Chateau de Fosse-Seche Arcane, which will run you about $30. "This is a dry Chenin that can fool you into thinking that it could be sweet just based on the nose," he told Eater. Once you take a sip, you get "an explosion of baked apple" and a hint of dried honey.

But if you're more of a beer drinker, a nice brown ale or a coffee stout would help bring out the subtle spice flavors in the pie, according to Draft Mag. Spice seems to be a big theme in the beer recommendations, in fact. A spiced ale to enhance pumpkin flavors is also recommended by The Spruce. It looks like beer definitely has a place at the table on Thanksgiving.

You can also look to the liquor cabinet for inspiration — brandy and whiskey are perfect drinks to offset the flavor of pumpkin pie, along with cognac or bourbon. There are tons of recipes for bourbon pumpkin pie, as seen on Epicurious and really, if the liquor is a potential secret ingredient in a dish, then it's probably going to pair well with it.

And if all this sounds like too much work and you just want to eat some pie with a chaser of Fireball whiskey, go right ahead.

This article was originally published on November 16, 2017