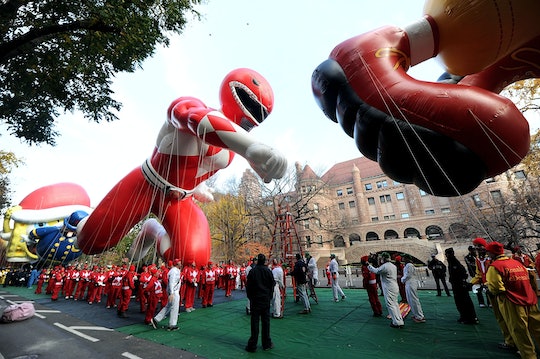 The Best Balloons From The Macy's Thanskgiving Day Parade Are...

Sure, there are performers, and marching bands and cheerleaders and elaborate floats, but honestly? The real stars of the 2015 Macy’s Thanksgiving Day Parade are the balloons. I mean, those things basically defy the laws of physics. They are huge! Not to mention that they take six to nine months to construct and need an entire team of people to control during the parade that consist of a pilot, two co-pilots, one captain, two assistant captains, on top of the team that controls the vehicle the balloon is tied to. And all of those people coordinate their outfits to match the design of the balloon. Not to mention it take an incredible amount of helium to keep those things afloat (the equivalent of approximately 500,000 Mylar balloons), and...there is a helium shortage. As the parade is one of the largest consumers of helium in the country, organizers tried to work around it by taking helium out of the balloons and re-pressurizing it (science!).

But balloon geekery aside, they’re just pretty freaking cool to watch, which makes them a big hit for kids and adults alike. There are 60 balloons of different sizes featured in this year’s parade, but here are some of the most notable, ranked by increasing awesomeness.