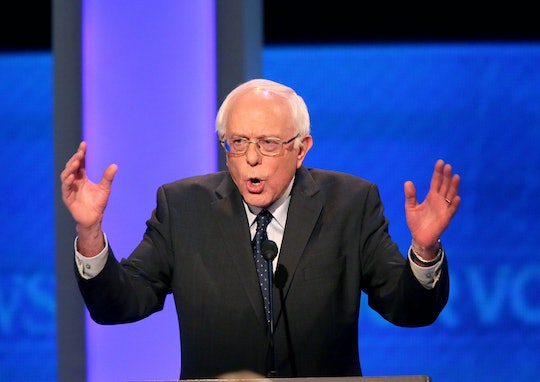 Senator Bernie Sanders has been known to land some powerful messages during the Democratic presidential debates. Who can forget when he said of Hillary Clinton, “The American people are sick and tired of hearing about your damn emails,” after all? Bernie Sanders’ quotes during the ABC Democratic debate on Saturday, Dec. 19 were no different — but this time, the biggest moments were about his own policies.

Although Sanders’ popularity peaked after the last Democratic debate on Nov. 14, according to polls aggregated by Real Clear Politics, he still lags behind Clinton by more than 20 percentage points. With just weeks to gain that vital ground before the Iowa Caucus on Feb. 1, the Vermont senator was looking to make a big statement at tonight’s debate.

The debate comes on the heels of the Democratic National Convention restoring the Sanders’ campaigns access to voter data, which had been taken away from Sanders after it was revealed that his staffers viewed information collected illegally from the Clinton campaign. Even though the DNC said in a statement on Friday that the Sanders campaign was in compliance again, the issue was expected to be a big topic between normally genial competitors Sanders and Clinton during the debate. Sanders also looked to redirect attention to his policies, with a lot of emphasis put on his plans to improve the economy.

As has been the case in the past two debates, Sanders’ statements seemed very well-received among the audience. In tonight’s case, that was a particularly big deal because those voters will be among the first in the country to cast their votes for Sanders, Clinton or long shot opponent Martin O’Malley when the state hosts the opening primary of the election season on Feb. 9. Based on his performance tonight, the Sanders campaign is likely walking away from Manchester with more confidence in his chances.

Here are Bernie Sanders' best quotes from the ABC Democratic debate on Dec. 19.

In the first debate after the San Bernardino terrorist attack, there was naturally a lot of attention on national security. Sanders said he is capable of keeping the country safe without getting America involved in another war.

I’m running for president because I want a new foreign policy. One that takes on ISIS. One that destroys ISIS. But one that does not get us involved in perpetual warfare in the quagmire of the Middle East, but rather works around a major coalition of wealthy and powerful nations supporting Muslim troops on the ground. That’s the kind of coalition we need and that’s the kind of coalition I will put together.

It is not Assad who is attacking the United States. It is ISIS.

After Martin O'Malley criticized Sanders' position on guns, he (no pun intended) fired back by making it clear he is committed to firearm reform.

Do not tell me that I have not shown courage in standing up to the gun people, in voting the ban assault weapons, voting for instant background checks, voting to end the gun show loophole and now in a position to create a consensus in America on gun safety.

Asked about whether it is ever acceptable to racially profile Americans, Sanders turned the conversation to Republican frontrunner Donald Trump by saying he is actually one of the bigger threats to the majority of American people.

They’re saying the rich are getting much richer, the poor are getting poorer, what are you going to do about it. What are you gonna do for my kids? Then somebody like a Trump comes along and says, “I know the answers! The answer is, They’re all the Mexicans. They’re criminals and rapists. We gotta hate the Mexicans. Those are your enemies! We hate ALL the Muslims because ALL the Muslims are terrorists. We gotta hate Muslims.” Meanwhile, the rich get richer. So what I say to those people who go to Donald Trump’s rallies: Understand, he thinks a low minimum wage in America is a good idea. He thinks lower wages are a good idea. I believe we stand together to address the real issues facing this country.

One of the best moments of the night came when Sanders was asked if corporate America would support him as president. "Nope I think they won't," he quickly responded to laughs from the audience. He went on to explain...

After agreeing with some of Clinton's points on the merits of the Affordable Care Act, Sanders said the "bottom line" is that the United States needs to guarantee health care to all people.

Why is it that we spend almost three times per capita as to what they spend in the U.K.? Fifty percent more than what they pay in France? Countries that guarantee health care to all of their people and in many cases have better health care outcomes.

About the obscene levels of student debt that most college grads face, Sanders said he wants free tuition for public colleges.

We have some colleges and universities that are spending a huge amount of money on fancy dormitories and on giant football stadiums. Maybe we should focus on quality education with well-paid faculty members... All young people should be able to get a college education

Sanders said we need major reform so that United States doesn't have the highest incarceration rates in the world.

We need major, major reforms of a very broken criminal justice system. What that means is that police officers should not be shooting unarmed people, predominately African Americans... We need basically to pledge that we're going to invest in this country in jobs and education, not more jails and incarcerations.

He went on to explain that starts with reframing drug abuse. He said, "Addiction is a disease and not a criminal activity."

Sanders ended the night by saying we need a political revolution and supporting his competition ("On our worst day, I think we have a lot more to offer the American people than the right-wing extremists"), but based on the applause that answered that statement and many of Sanders' other comments throughout the night, it seems a lot of people were feelin' the Bern.