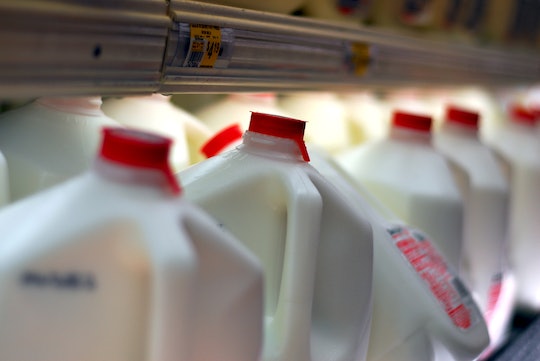 Winter Storm Jonas arrived in some parts of the U.S. Thursday and is expected to move north all the way up to New York City Saturday and turn into a full-on blizzard, and it's seriously freaking everyone out. As the unofficial blizzard protocol goes, people are heading to the grocery story in droves in the storm leaves them snowed in. And, for some weird reason, people are stocking up on milk and bread — two common storm items. Bread and milk memes flooded the internet to mock the strange and funny ways people prep for inclement weather.

There are several theories floating around to explain why milk and bread are what people pick up when they're pre-storm shopping. Lisa Brateman, a New York City-based psychologist told How Stuff Works that people have a tendency to buy milk and bread before storms because it gives them "a sense of control in an uncontrollable situation." She said the decision obviously isn't logical, because bread and milk are perishables. Buying bread and milk might also have some historical roots. A reporter for Pittsburgh Magazine reported that during the city's worst snow storm in 1950, grocery stores experienced milk and bread shortages, so that might be why some people feel like they have to buy those items prior to storms.

Whatever the real reason may be, people are obsessing over buying two particular items at a grocery store and the internet thinks it's hilarious. Below are the best bread and milk memes that capture the pre-storm craze.

Though stocking up on milk and bread doesn't make a lot of sense — foods with longer shelf lives would be better options if you were truly snowed in for a long time — if it makes people feel more secure about staying in during the storm or getting snowed in, then I guess I won't blame you. Storms can be terrifying, and no one knows how much damage Winter Storm Jonas will bring until it arrives. Thank God for milk and break.