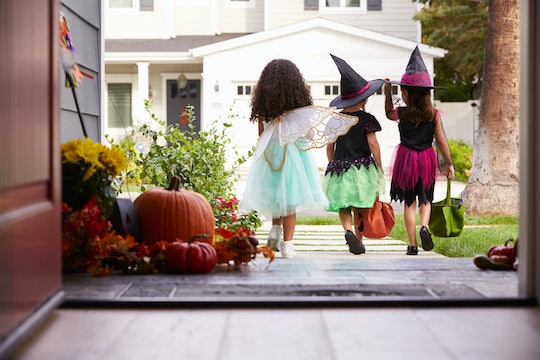 Arguably the best thing about Halloween is celebrity kids' costumes. Many celebrities have enough time and money to go all out for their children on this spooky holiday, after all, which translates to high entertainment for fans. And on that note, here are the best celebrity kids' Halloween costumes of 2018.

Countless parents flock to social media on Halloween to check out how their favorite celebrities are celebrating. Although it's fun enough to check out adult costumes (did anyone catch Beyoncé's incredible Toni Braxton ensemble?), it's especially thrilling to witness the cute costumes of celebrity kids.

Take Neil Patrick Harris' twins, Gideon and Harper, for instance. Each and ever year, Harris and his husband, David Burtka, dress their kids up in spooktacular getups. The family's 2017 theme was "Carnival of Curiosities," which featured Gideon as a bearded lady and Harper as a weightlifter. It was amazing.

Of course, Harris' twins aren't the only Halloween champs out there. Feast your eyes on the best celebrity kids' Halloween costumes of 2018.

Does it any better than this? The Harris-Burtka family really went all out with this one.

"Welcome, foolish mortals," Burtka captioned the snap. "We hope your Halloween is happily haunted, but heed this warning: beware of Hitchhiking Ghosts!"

Khloé Kardashian's Baby Is "Too Cute To Spook"

"Happy Halloween!!!! It’s our first Halloween together!!!!" Khloé Kardashian captioned a shot of True in a unicorn costume. "She’s too cute to spook!! (Don’t judge me, I have more costumes to post lol)."

Kylie Jenner's beautiful daughter, Stormi, dressed up as a butterfly for Halloween. The costume was likely a nod to all of the butterfly imagery Jenner shared before her birth in February.

Busy Philipps' Daughter Is A Cool Kid From The '80s

"She wanted to go as a realistic girl from the 80s," Phillips said about her creative child. "I love her so much and how did I get a kid so damn cool when everyone knows I have no chill??"

What's better than sextuplets dressed up as farm animals? Probably nothing.

Congrats to Sweet Home Sextuplet stars, Eric and Courtney Waldrop, for coming up with six baby costumes this year. I imagine that couldn't have been too easy.

If you're a big Southern Charm like I am, you're probably dying over Cameran Eubanks' daughter, Palmer, dressed up as Patricia Altschul. Making matters even better? Eubanks' enlisted their neighbor's dog to play Altschul's butler, Michael.

"I give you Patricia and Michael the Butler. 🍸," Eubanks said about the getup. "Special thanks to @laurenmancke for making these incredible costumes."

He's got money, he's in magazines/He's got more honeys, than any honeybee...

Snooki has one cute squad. Her kiddos, Giovanna and Lorenzo, paid tribute to the holiday by dressing up as super heroes.

"My squad is killing the game. #myheroes," Snooki said.

Today co-host Jenna Bush Hager's two daughters, Poppy and Margaret, are incredibly sweet. Case in point: They sported "candy queen" costumes for the holiday. I can't help but love how creative these getups are.

"My candy queens. (BTW: too much candy does the opposite of turning you into a princess...stomach aches, melts etc!)" Hager joked. "HOLDING my babes close this morning. Let’s love each other. ❤️"

A perfect example of a simple and sweet costume is Lauren Conrad's son, Liam, who dressed up as a "little blackbird" for Halloween. Aww.

Catelynn and Tyler Baltierra's daughter, Nova, was a perfect version of Cindy Lou Who from Whoville.

Props to Tyler and Catelynn for styling Nova's hair.

Yep, it's clear celebrity parents are killing it with their kids' costumes. Happy Halloween, everyone.

This famous family knocked it out of the park with these Lego costumes. Silas wasn't alone in his Halloween get-up — mom and dad went all-out as well.

Just because baby Banks is only a week or so old doesn't mean that she has to miss out on all of the Halloween fun. Mom Hilary Duff put her in a onesie and made sure she was ready to celebrate.

Celebrity families might not be just like yours, but they sure do it up right when Halloween rolls around.