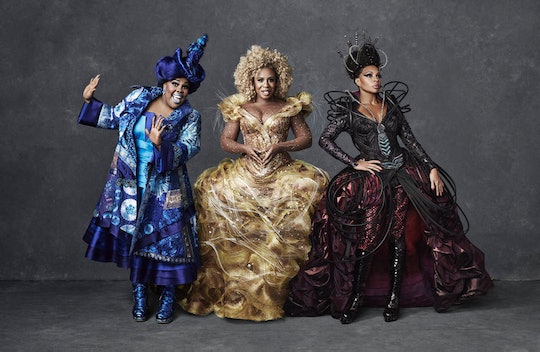 The Best Costumes From 'The Wiz Live!', Cuz The Emerald City Looks Good

The Wiz Live aired Thursday night, and oh my goodness, it was amazing. When NBC revealed the cast for the show, we knew it would be an amazing performance full of spot-on singing and dancing. But the costumes from The Wiz Live! took the revival to the next level.

More Like This
The Best Pampering Self-Care Products For Pregnancy
11 Beauty Products To Make You Feel Like You’ve Got Your Life Together
32 Adorable Father’s Day Shirts For Dads, Grandpas, & Yes, Babies Too
The Cutest 4th Of July Outfits For Babies, Toddlers, & Kids

With 18 musical numbers, Cirque du Soleil acrobats, and an all-star cast that includes Mary J. Blige, Shanice Williams, Queen Latifah, Uzo Aduba, and Amber Riley, viewers were guaranteed some gorgeous, jaw-dropping looks. Designed by Paul Tazewell, a five-time Tony Award-nominated costume designed whose resume includes On The Town and Hamilton, the costumes were created over the course of 9 months (so can we say the costumes on The Wiz Live are his baby?.) And they were only elevated by the makeup, which was perfected by Acadamy Award nominees Dave and Lou Elsey.

Of course, words won't do justice to the costumes and makeup from The Wiz Live! Take a look at some of the best looks from the show.

I want one of these slinky-style dresses. I need one.

The Evil (and On-Fleek) Crows

Those wings. That attitude.

I feel like he's about to start doing the robot dance on a New York City sidewalk. But his act was so much better.

Common's performance was absolutely amazing. It helped that his costume looked like it belonged in The Hunger Games — in a totally good way.

Can I wear this costume for St. Patrick's Day, please? Or, really, any of the costumes the dancers in Emerald City wore.

These might have been my favorite costumes in the entire show.

Mary J. Blige's outfit is ridiculously good — and sort of spidery. Is anyone else getting some excellent Halloween ideas for 2016?