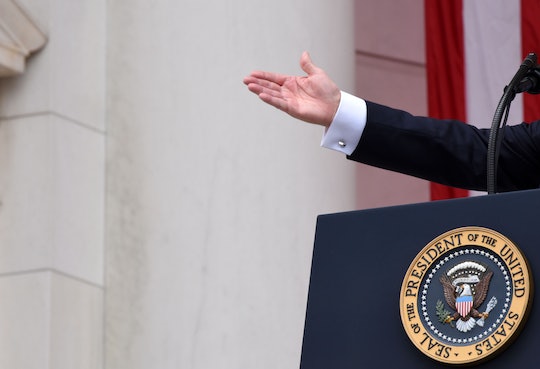 No one's quite sure how it happened. Thirty minutes later... then 45, then one hour later, the tweet was still up on the president's timeline. Pundits began weighing in on what exactly it meant (Is it code? Are we all about to be Raptured?), but no one could explain it. "Despite the constant negative press covfefe," it read, perfect in its simplicity, with its mysterious, lingering aura, incomplete. Even the best, quippiest "covfefe" tweets that followed were, unsurprisingly, no help at deciphering President Donald Trump's midnight message.

Some had clever hot takes right off the bat, of course. "Covfefe — our President is human. Hilarious! Funny to watch left go nuts," Kayleigh McEnany wrote (who is also a Christian. Conservative. CNN Commentator. The Hill Contributor. Above the Law Columnist. Harvard Law School, J.D. Georgetown SFS. Oxford University. Mets fan, according to her Twitter bio). "An intentional 'dog will chase the tail' tweet!" Yes! It was especially funny because it was probably true, of course. Trump was playing a prank. And we're all stupid.

Others refused to believe that the actual POTUS had intentionally tweeted nonsense. "Seriously though, is there no one in the Administration with the ability to address the tweet or to tell a person who can to do so?" one user wrote.

"The people who run our country can't figure out how to delete a tweet in under an hour," another user tweeted, suggesting a scenario that was much more likely, but a lot less fun.

Across Twitter, the public cast varying covfefes—I mean opinions on the tweet. Or rather, used the brief political respite to make some excellent covfefe jokes:

To be fair, it's far more likely that some poor White House staffer accidentally hit "send" before they were ready and then immediately passed out. Maybe they accidentally scheduled the wrong tweet on Tweetdeck or accidentally forgot they were working for the White House where mistakes like this just can't happen. Whatever the case, it didn't stop Twitter users from suggesting instead that "Hillary had a 30 page plan about #covfefe on her website but none of you bothered to read it," or that "Everyone knows #covfefe is short for Carbon + Oxygen Vs. Iron + Iron." (Obviously. Get it together, America.)

Exactly how long it will take for the president or his aides to finally wise up and remove the tweet (or, as Kayleigh McOvfefe insisted, to come forward and admit this was all a ruse to take down all of us dumb-dumb reporters) is yet to be seen. (As of 2 a.m. ET, it was still there.)

For now, it's probably best if you sit back and enjoy the Twitter show before we all have to return to the hell-fire that is modern American politics. May the covfefes be ever in your favor.