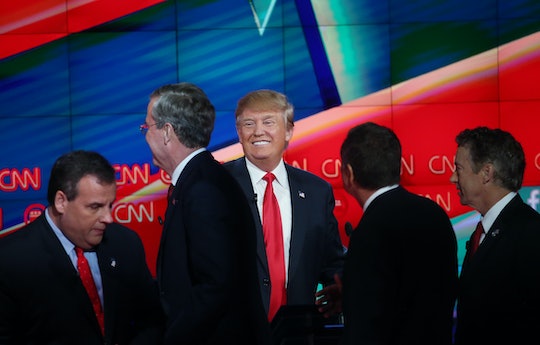 Business mogul Donald Trump was booed repeatedly during the CNN GOP debate Tuesday night and it seemed as if all of his fellow candidates had turned against him. The debate opened with the candidates discussing — but more accurately, outright bashing — Trump's plan to bar Muslim immigrants from entering the U.S. Trump sparred with former Florida Gov. Jeb Bush and even with one of the CNN moderators when he got really desperate, but Trump's faces during the debate are what made it the most clear that he definitely lost.

Trump's debate performance was subpar at best. Most of the other candidates pointed out why his policies were completely absurd. At the end of the debate, Texas Sen. Ted Cruz even said, "If I'm elected ... we will build a wall that works. And I'll even get Donald Trump to pay for it," according to a tweet from CNN.

Trump's closing statement also wasn't very good. He said if he were elected president, "We would win again, we would win a lot." He finished by saying the country would be greater than ever before, but — like much of Trump's approach to his campaign — he didn't remind voters of how his policy proposals would actually help make the country better. But the real evidence for why Trump lost came in his faces. They were less snarky this time and more caught off guard, and it was truly entertaining. Here are the best of Trump's "I definitely lost" faces:

Yeah, I mean...those aren't the faces someone makes when they're feeling especially confident about their performance. That's for sure.