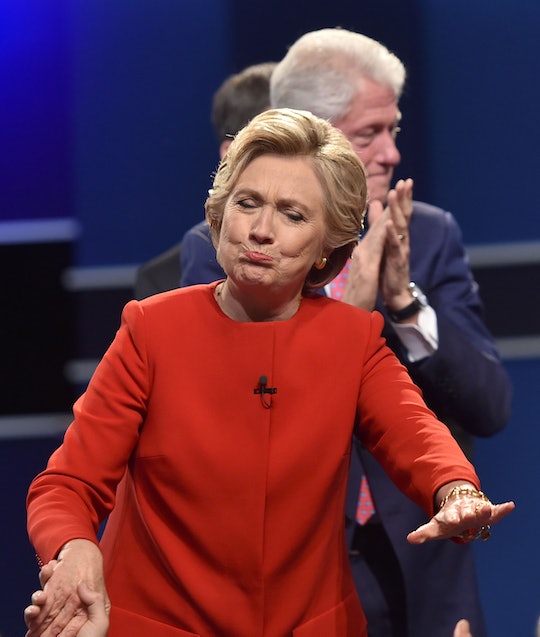 Much has been expected of the internet, and luckily, the internet has not yet disappointed. Especially during this election season. And Monday night specifically gave us excellent Hillary Clinton memes from the debate.

In case you somehow missed it, there was a debate Monday night. Presidential candidates Donald Trump and Hillary Clinton faced off on the same stage for the first time in a 90-minute debate, according to the New York Times. The event, which was held at Hofstra University on Long Island, was moderated by NBC anchor Lester Holt and the topics covered included "achieving prosperity," "securing America," and "America's direction."

And just a few minutes into the debate, people had already posted hilarious and perfect memes and tweets all over social media. It's really no surprise, because never before has America seen two more meme-worthy candidates than Trump and Clinton. What with all the name calling, sickness scares, and dabbing, there has been no shortage of material to work with. And because there's just so much to meme about, we're going to focus on Clinton for now. Keep scrolling to see a roundup of the best memes and posts the internet had to offer during the debate showing.

Props to this Twitter user, because this picture is excellent timing. Maybe this was taken right after Trump repeated the widely debunked myth that Clinton started the "birther" controversy? Or maybe it was right after Trump said "ugh" upon mention of black businesses? Regardless, Clinton is holding it together so well.

Clinton has spent most of her non-talking time during this debate looking like a mother listening to a young child. She pursed her lips and looked at the camera when Trump got a little ridiculous — like when he said his temperament was better than Clinton's. Or when he repeated that Clinton doesn't have the "presidential look."

Bless her. Clinton kept her cool when Trump called President Obama "(Clinton's) president." She did so much better than any one of us civilians would have done.

She probably wrote this when he questioned Clinton's stamina. Or probably when he avoided admitting to his sexist comments directly towards women. It's like there's so much to address that there's no possible way to address it all.

This is so accurate. It's like she's trying to let us know that this is all some big joke. If only this were actually The Office...

Yep, that looks right. Pretty much sums it all up.