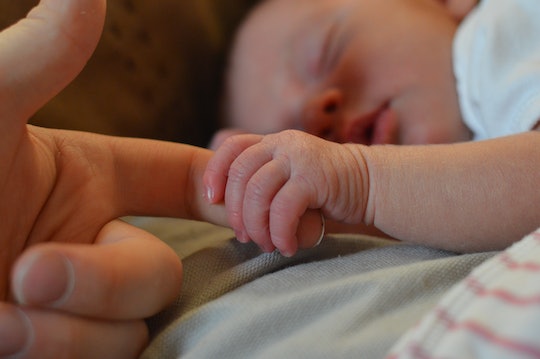 Normally, experts advise against having a cell phone nearby for a good night’s sleep. But a new study has pointed out one surprising way that cell phones can actually help babies sleep better — and lower their risk of sudden infant death syndrome (SIDS). Experts at the Yale School of Medicine recently released findings suggesting that cell phones might be the best learning tool for teaching safe sleep practices to new parents. According to those findings, parents were more likely to follow safe sleeping guidelines if they received their information on a mobile device rather than through other traditional teaching methods.

For the study, “safe sleeping” meant following many of the practices outlined by the American Academy of Pediatrics for reducing the risk of SIDS: placing babies on their backs, not on their sides or stomachs; keeping them in the room with the mother but not in the same bed; avoiding soft bedding that could strangle or suffocate them; and using pacifiers. According to YaleNews.com, researchers tested two methods of teaching parents about safe infant sleep practices: one was a program where nurses talked to new parents while still in the hospital; the other involved sending informational videos and messages about safe sleep via cell phone after the family was discharged.

The study found that mobile phones were by far the more effective way to engage new parents. Educating new parents on safe infant sleep practices using mobile videos led to rates of back sleeping upwards of 92.5 percent and a room sleeping (without bed-sharing) rate of 85.9 percent, according to the study. Those rates outpaced the ones for parents who only received in-hospital advice, and were higher than those found in prior research using traditional teaching methods.

The idea that sending information to new parents on their phones would be more effective than telling them in the hospital probably rings true to anyone who’s experienced the fog of new parenthood. Those first few weeks after bringing home a new baby can feel like a struggle in almost every sense of the word. From the physical recovery of giving birth to the emotional rollercoaster that can accompany new parenthood, it can take an effort just to remember your own name sometimes. And when you add in the sleep deprivation that so many new parents deal with, it makes sense that the instructions from well-meaning nurses and postpartum staff fade away when parents are dealing with the immediate need for more sleep and keeping baby nearby.

But with more than 3,500 children dying each year because of unsafe sleep environments, experts are looking for more effective ways to help parents keep sleep guidelines top of mind. Yale pediatrics professor and lead author Eve Colson told YaleNews.com that in the absence of a widely available mobile program, parents should continue to pay close attention to the resources and tips from hospital staff. “Don’t give up on what you are taught to do in the hospital,” she said. “Many hospitals are already role-modeling the right thing. Keep following the safe sleep practices they show you that are recommended by the American Academy of Pediatrics.”

But it might also be a good idea to download a few apps on safe newborn sleep to have handy on those nights when the hospital — and every decent night’s sleep you’ve ever had — feels like it happened a lifetime ago.