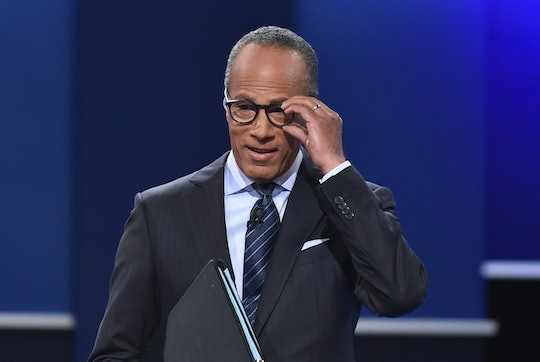 You may not have heard of Lester Holt before Monday night's first presidential debate, but he's almost as important as the two candidates on stage. Holt was the moderator for the debate, and moderators have a tremendous responsibility to monitor the conversation, keep the candidates on topic, interrupt them appropriately, and act fairly towards both parties, according to USA Today. With all of this new spotlight, of course, it's to be expected that the internet would come up with some hilarious memes and tweets about Holt.

Holt was noticeably silent for a majority of the debate, choosing instead to let the candidates duke it out over each other's records.

In the past, most debate moderators have often been criticized for some shortcoming or apparent bias, according to NBC News. Holt mostly steered clear of those types of criticisms by being minimally involved in the conversation and interrupting only to restate the question when a candidate got off track or call time when a candidate went way over. Many on Twitter took to criticize him for his silence, but most seemed to simply sympathize with poor Holt.

A lot of people felt really bad for the guy, who probably didn't really know what to expect. Trump is known to be unpredictable, so it must have been hard to prepare for the debate. And after all, this was always going to be a vicious battle; Holt was just a sacrifice waiting to happen.

Some noted that Holt didn't fact-check many of the statements made by the candidates, particularly ones by Trump that most knew to be false. But Trump had previously made public his desire for the moderator and the media to not act as fact-checkers, according to the Huffington Post.

The Commission on Presidential Debates agreed with Trump, stating that candidates, not the moderator, should be fact-checking each other. But Holt wasn't entirely silent when Trump lied. He did correct the candidate occasionally, like when Trump said he opposed the Iraq War from the start, which is false, according to CNN.

But with all of Trump's false statements and interruptions, it was hard to get a word in. I don't blame Holt.

Some, however, are not so kind. Twitter users jokes throughout the debate that Holt had gone missing, and was not in fact even sitting in the debate room.

But alas, he was. And he wrapped it up and made it out alive. Congrats, Holt.