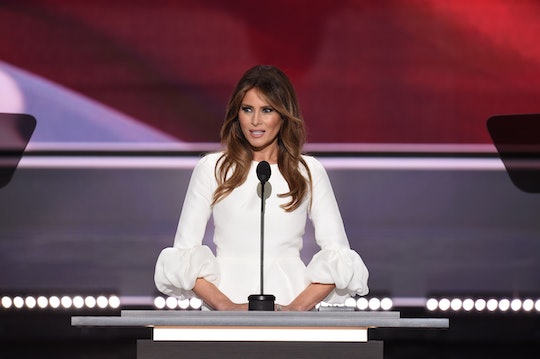 Say what you will about Donald Trump, but you can't deny that he married a very smart woman. At Monday night's Republican National Convention festivities, Melania delivered a solid, well-rehearsed speech of which any former first lady might approve. Keeping her remarks concise and to the point, Melania talked about what she believed were her husband's positive attributes and shared her initial thoughts upon first entering the United States, as well as issues that one might believe she would take under her wing, should Trump win the presidency in the fall. Some of Melania's best Republican National Convention speech quotes proved that, if nothing else, she knew well how to prop up her husband's campaign.

"Donald J. Trump is ready to serve as the next President of the United States," she said, addressing a frenzied crowd of delegates on Monday night inside the Quicken Loans Arena in Cleveland, Ohio. Just minutes earlier, Trump had taken to the stage, backed by Queen's rousing "We Are The Champions" and a curtain of blinding white light, to introduce his wife. While the moment set Twitter and social media abuzz, no one could deny that what followed was an impressive, effective speech (albeit somewhat overarching and vague) that was worthy of it's own headline. As one CNN reporter put it, Melania more than achieved what she had come to accomplish as a potential presidential spouse.

Despite the fact that it was her first major campaign speech, Melania managed to deliver some of her best lines without slipping up:

"I cannot and will not take the freedoms this country offers for granted."

After first moving to New York from Slovenia (then Yugoslavia) in 1996, Melania said she saw "both the joys and hardships of daily life." She recalled her pride at finally becoming a citizen in July 2006 (just months after the couple's only son, Barron, was born), noting that it was "the greatest privilege on planet earth."

"My husband has been concerned about this country for as long as I have known him."

Whether or not this particular line was actually true wasn't quite the point — by vaguely alluding to the fact that Trump's American loyalties went back years, Melania's speech did enough to convince those teetering on the fence that the potential first couple could be trusted to stand up for traditional values. While her husband's trustworthiness numbers are still frustratingly low (a recent CBS/New York Times poll showed that some 62 percent of voters found him "untrustworthy"), Melania may provide earnest conservatives a more tempered voice and a likability that Trump cannot bring to the table, despite the fact that she herself is not incredibly well-liked. If nothing else, Melania was, on Monday night at least, the skittish voter's tipping point.

"[The former GOP candidates] deserve respect and gratitude from all of us."

Melania extending an olive branch (and in this case, a salutatory round of applause) to Trump's former GOP rivals was perhaps one of the smarter moments of the night. Rather than using the platform to simply tell self-serving stories about the couple's relationship, Melania (or rather, her speechwriters) smartly took the moment to cauterize any festering wounds between the presumptive Republican nominee and his former competitors — a wise decision, given that a Trump presidency would need all the help it could get.

"We want children in this nation to know that the only limit to your achievements is the strength of your dreams and your willingness to work for them."

Cliché? Of course. Over-produced? Definitely. But throwing in a few good lines about children into any political speech, whether the speaker is on the ticket or not, is a guaranteed win. And with a son of her own, 10-year-old Barron, Melania not only set herself up as a first lady that would advocate for children, but as a relatable mother figure — something Trump's campaign needed badly.

"I'm fortunate for my heritage, but also for where it brought me today."

In a campaign based on plenty of vitriol and seemingly xenophobic and racist statements, reminding delegates and voters that Melania Trump is, indeed, and immigrant can never hurt. Reminding them that she's an immigrant who came to the United States and succeeded — whether you define her path here as a success or not — is even more important.

Short, sweet, and to the point. Melania's "He's the guy" quip went over well with the audience of conservative voters as planned. Aside from being relatable, it painted her husband in a slightly less aggressive shade and, if only for a moment, made audience members feel as if she was talking about their own neighbor.

"He's tough when he has to be, but he's also kind and fair and caring ... that is one reason I fell in love with him to begin with. Donald is intensely loyal."

Sure — hardly anyone outside the Quicken Loans arena believed her. But it was a pretty line nonetheless. And who doesn't love a good love story?

"There is a good deal of love in the Trump family. That is our bond, and that is our strength."

Discussing the "utmost respect" with which Trump approached his relationships with his own children, Melania noted that even his adversaries could, if nothing else, admit that Trump was a loving father.

"You judge society by how it treats its citizens."

Speaking to the causes she would take on as first lady — namely children and women's issues — Melania paraphrased an oft-cited Pearl S. Buck quote, that, in full, reads,

Our society must make it right and possible for old people not to fear the young or be deserted by them, for the test of a civilization is the way that it cares for its helpless members.

"[This campaign] would not be a Trump contest without excitement and drama."

In all fairness, could anyone argue otherwise?

Given all the hurdles that Trump has yet to overcome on his way to November, perhaps he ought to consider bringing Melania along to all his campaign events — surely, given her decidedly even-handed contribution — it couldn't hurt.

Watch the entirety of Melania's speech below: