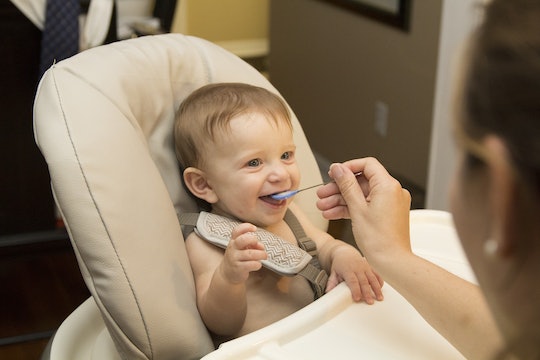 Starting solid foods is an exciting milestone for babies and parents. Seeing your little one experience new flavors and textures can be adorable, and of course, ridiculously messy. But it can also be a bit stressful, because there's so much to know and consider before you start. If you're anxious about figuring out the best solid food schedule for babies, don't worry: the process isn't as intimidating as you might think.

The first thing you should know is that most doctors will tell you to wait until around 6 months old to start solids, according to Parenting. That's when a baby's gut will be mature enough to handle solids, and when they'll be ready to actually swallow as opposed to reflexively spitting everything out.

When you're just starting out with solid foods, you'll probably want to offer your baby just one or two meals a day according to Parents. Kids Health suggested started with single-ingredient baby food purees, in whatever order you'd like. It's important to only introduce one food at a time, however, so that you'll be able to tell which food is the culprit if something causes an allergic reaction.

The process of spoon feeding solids can be incredibly messy, especially once your baby starts exerting some independence and wanting to feed themselves. At around 8 months, you can start letting your baby try finger foods according to Baby Center. Letting them feed themselves things like Cheerios or small bits of pasta or egg can help them develop their pincer grasp, an important motor skill.

Once your baby has gotten the hang of eating solid foods, you can bump up the number of meals they're eating per day. According to Essential Parent, by 9 months old your little one should be ready for three meals a day. Around this same time, they should also be ready to start eating table foods according to the Stanford Children's Hospital. Things like meat, cheese, pasta, beans — pretty much whatever is on your plate — are fair game at this point.

It's fine to give your little one a spoon to try and feed themselves whenever you're comfortable with the idea (and OK with cleaning up baby food splattered everywhere). But you may want to hold off on letting your baby use a fork until they're about a year old, according to Baby Center. By that point, they should be a little more coordinated and less likely to hurt themselves with it.

Though your baby may be happy to chow down on whatever food you serve up, it's important to remember that for the first year, most of their nutrition should still be coming from breastmilk or formula according to What To Expect. That means solids should be in addition to their bottles or nursing sessions, and not instead of.

Starting solids should be a daily adventure between you and your baby, not a source of stress. If you take it slow and follow their cues, you're both in for an enjoyable experience — and for wearing as much avocado as you eat.