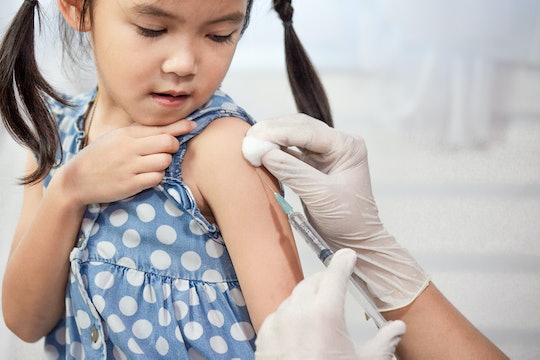 There's one seasonal change no one is happy to see, and that's the beginning of flu season. But you can start protecting yourself against that gross virus now. In fact, the best time of year to get a flu shot is fast arriving, so mark your calendar. Last year's flu season was particularly rough, so it's a good idea to protect yourself against the coming viruses as soon as possible.

In general, it's best to get a flu shot before the flu season really gets going. For instance, getting a flu vaccine before the end of October is ideal, according to the Centers for Disease Control and Prevention (CDC). Because it takes a couple weeks for the vaccination to become effective, this should also be taken into account, as further noted by the CDC. So basically? The sooner you can get the flu vaccine, the better. Get that vaccine before the first person in your city starts sniffing and coughing from the flu, and you're probably going to be in good shape.

Plus, medical professionals echo this advice as well. For instance, pediatric allergy and asthma specialist Dr. Dave Stukus recommends getting a flu shot as part of your routine October health maintenance. As someone who also walks the walk, he posted a flu shot selfie showing off the bandage from the shot. Would you also post a #FluShotSelfie?

It's wise to approach the coming flu season with an abundance of caution, in part because last year was so bad. In fact, over 80,000 Americans died from the flu during the 2017 to 2018 flu season, including 180 children and teenagers, as reported in the New York Times. It was a record-breaking year in this very sad way.

And although you likely don't know anyone who's gotten it yet, the flu season for 2018 to 2019 began the week of September 27, as noted in a statement from the U.S. Food & Drug Administration. Flu season is already here. Although there's no way to predict the exact severity and timing of the flu seasons from year to year, it's OK to be cautious, as noted by the CDC. Every season brings its own challenges and viruses.

Plus, it looks like healthcare professionals are optimistic about the effectiveness of this year's vaccine. "We have some confidence, based on the pattern of influenza circulating now in the Southern hemisphere, that the flu strains chosen for this year’s U.S. seasonal flu vaccine should offer Americans good protection," said FDA Commissioner Scott Gottlieb, M.D. in a statement from the U.S. Food & Drug Administration. "A seasonal flu vaccine is one of the most effective and safest ways to protect yourself, your family and your community from the flu and serious flu-related complications, which can result in hospitalizations." And if you're going to get a flu vaccine this year anyway, well, now is an excellent time. Move yourself to the front of the line and get the vaccine now to help protect your health in the months to come.