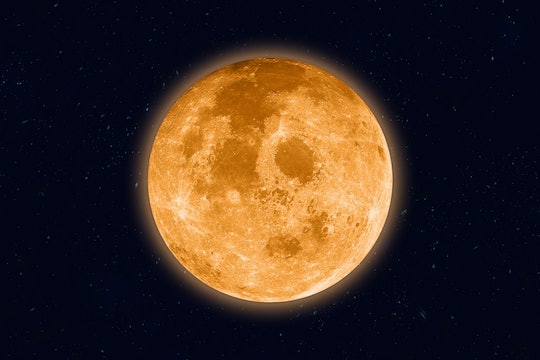 The internet and social media might be a total distraction, but if there's one useful thing to come from them, it's being alerted to the latest celestial events just in time to catch them for yourself. It seems like every time you turn around, there's another eclipse or supermoon that's bigger or brighter than the last. If staring into the sky is your jam, you'll want to know the best time to watch the super blue moon later this month so you don't miss it. This month's epic lunar event hasn't happened in centuries.

When to watch the blue moon on January 31st depends largely on where you live. If you live on the east coast, the blue moon will begin to turn blood red at 6:48 a.m, according to Vox. If you live on the west coast and are up at 4:51 a.m., that's when you'll have a shot at seeing the lunar phenomenon. Hawaii and Alaska actually have the best shot of seeing the total eclipse, at 2:51 a.m. and 3:51 a.m., respectively.

A great tool for finding out exactly what time you need to be looking up at the sky is TimeandDate.com. It automatically plugs in your location and then gives you a summary of what you'll see minute by minute. This website is also a good resource for learning how much of the eclipse you'll be able to see. For many of us in the southern half of the continental United States, our proximity to the equator will keep us from seeing the whole show.

Unfortunately, if you're like me and too close to the equator, the bulk of the eclipse will happen below the horizon. If that's the case, luckily we can count on the internet again to keep us posted on exactly how cool it was once we wake up from a little extra sleep!

Not sure exactly what's you'll be able to see if you drag yourself out of bed in the middle of the night? What people are calling the 'blue moon' is actually three different lunar phenomena at once. The blue moon is known as the second full moon in a month. This time the full moon comes around, it's going to be met with a total lunar eclipse. Vox explained, "For 77 minutes, the usually silvery moon will be covered with a blood-red/ochre shadow," which is why this upcoming blue moon is actually a blood moon as well.

Additionally, this blue moon is a supermoon, which, we're told by Space.com, is "when the full moon coincides with the moon's closest approach to Earth in its orbit." This makes the moon appear closer and brighter than it does other nights. When he spoke with Space.com, Noah Petro, deputy scientist of the Lunar Reconnaissance Orbiter mission at NASA said, "The main reason why the orbit of the moon is not a perfect circle is that there are a lot of tidal, or gravitational, forces that are pulling on the moon."

The moon's closest and farthest approaches from the Earth change with every lunar month, meaning certain types of supermoons are more rare than others. How rare is this blue-moon-blood-moon-supermoon-eclipse combination? Forbes explained that while this exact combination only occurs once every 265 years, this is only because it happens on the second full moon of the month — which is simply a coincidence of the way we've set up our calendar. Supermoon-blue-moon-eclipse combinations, the real action in the trifecta, happen every few years. But Forbes pointed out, "The rareness of next Wednesday's eclipse is completely arbitrary, but the sight of a big, red, eclipsed moon is something you should never miss, so long as you have the opportunity."