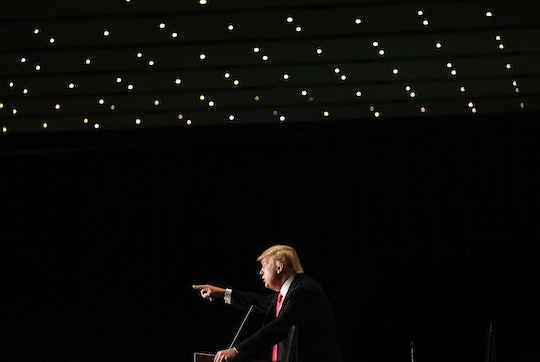 The Best Trump Tweets Of The 2016 Iowa Caucuses Show That People Are Still Obsessed With The Republican Candidate, For Better Or Worse

As the Iowa caucuses mark the first votes of the season, voters and political aficionados are cracking their knuckles and taking to Twitter. Business mogul Donald Trump was sitting in the lead ahead of caucus night, with a Des Moines Register poll showing him at 28 percent. Trump certainly dominated headlines this campaign season, suggesting that the country ought to build a wall between the United States and Mexico, deport all illegal immigrants, and busying himself with a number of sexist Twitter feuds (specifically, the way he treated former Secretary of State Hillary Clinton, journalist Megyn Kelly, and badass actress Heidi Klum had the media and the public buzzing).

With all the kerfuffle that surrounds Trump, people tend to have strong feelings about the presidential candidate — and that's putting it mildly. Further dividing the electorate, Trump ramped up emotions just before the caucus kicked off, saying at a rally, "If you see somebody getting ready to throw a tomato, knock the crap out of them." Keep it classy, Trump.

Trump regularly receives plenty of attention for his extreme views. Even before Sarah Palin popped back onto the scene to support him, Trump was known to voters and the media as the candidate with the most social media pull and attention. Most notably, people's reactions to Trump during Monday night's caucuses were all fantastically Twitterable:

People are feeling a bit antagonistic towards Iowa. Iowa, you're walking a fine line with these folks:

Even The Bachelor and Supergirl fans got involved.

This guy weighed in and tried to jinx things: