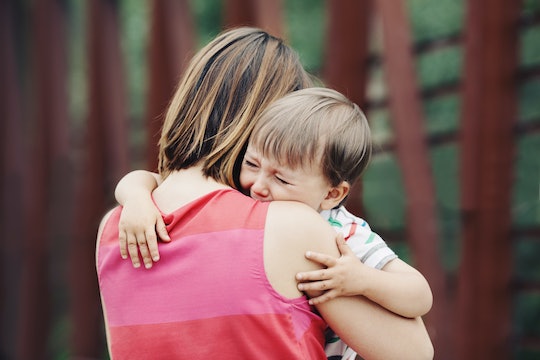 Let's face it — having to deal with the clinginess that comes with dropping kids off at school or with babysitters is one of the hardest parts of parenthood. Nobody enjoys seeing their babies anxious and worried, and more, nobody enjoys leaving them behind when they're visibly upset — it's heartbreaking. But, having to deal with it, unfortunately, is a part of daily life for the majority of parents. So knowing the best way to handle kids' separation anxiety can give you one less reason to worry.

According to Parents, children go through separation anxiety for different reasons, but at the root, it's because they know their wellness depends on having their primary caretaker close by. In fact, anxiety can be a sign of autonomy, Parents noted, as throwing a fit when you leave is a kid's way of showing they have an opinion on the matter and that they want things to go their way.

Separation anxiety is a normal part of development, and it'll typically disappear over time, Parents mentioned. There's no set timeline on how or when it will start or stop for your kid, however. There are many circumstances, including your child's own personality and temperament.

Parents also noted that although it's difficult to hear a child cry, remember that separation anxiety does have a positive aspect: It indicates that a healthy attachment has bonded a caregiver and child.

According to Dr. Stephanie O'Leary, Psy.D, Founder and Director of Westchester Psychological Services, it's not atypical for children to experience separation anxiety, particularly when they are trying a new activity for the first time. "If you see your child become clingy and hesitant, even visibly upset, and it's the first time you're dropping off at daycare, school, or camp, or if it's the first day back after a break, there's not necessarily a need to worry," she says to Romper.

O'Leary reminds parents that it's important to keep in mind that kids are more likely to have trouble separating from a parent or caregiver when they are tired, hungry, or not feeling well. (Which, you know as a parent, is about 90 percent of the time for most kids.) So it might ease your mind knowing these factors can contribute to your child's separation struggles.

What is important, O'Leary says, is how you react to your child's separation anixety. Staying calm is best, but when kids express worry or fear, it's only natural to become emotional as a parent. Unfortunately, O'Leary mentions, this can just make things worse.

Your go-to parenting tool in this situation is to get down on your child's level, use a very calm, neutral tone of voice, and start by validating your child's experience "by saying something along the lines of, 'I know you're having a hard time right now, we're going to figure out a plan together.' This validating statement will actually ease your child's worry because you are not dismissing his or her feelings, and you're sending the message that you are on their side, even if you honestly have no idea what the big deal is," she says.

A validating statement can be much more reassuring to a struggling child than common reactions, like "oh, you're OK," or, "look, all the other kids are having fun." From there, O'Leary notes, take things one step at a time.

"If the situation calls for you to leave in a timely fashion, such as school drop off or when you're leaving the house and your child is staying with a sitter, you can provide reassurance by saying, 'I know this is hard, I know you can handle it, I will be back later today.' Then, follow through by walking away, despite how much resistance you receive," she recommends.

Checking in with your child's caregivers a short while after the fact can help to ease your mind, too. Kids often settle down quicker than you might think.

Separation anxiety is a typical part of a child's development, and though it's not necessarily easy on anyone, it does eventually ease up. Try not to worry too much and remember that the best thing for everyone is to validate your child's feelings without getting emotional. (Easier said than done, I know.)