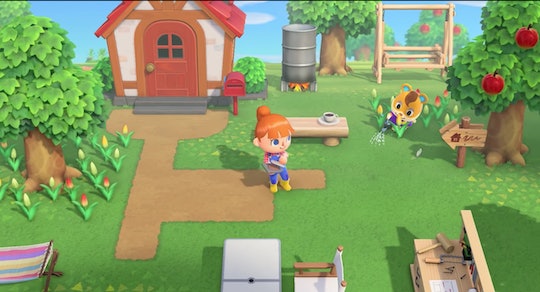 Now You Can Get Biden & Harris Lawn Signs In 'Animal Crossing: New Horizons'

While the ongoing coronavirus has certainly changed how candidates campaign, one 2020 nominee is taking his campaign into unchartered, and unexpected, territory. Democratic nominee Joe Biden brought his presidential campaign to "Animal Crossings," a popular video game series developed by Nintendo. As a result, "Animal Crossing: New Horizons" players can now add Biden-Harris campaign signs to their yards and villages.

More Like This
The Obamas’ New Family Rule? Get Vaccinated If You Want To Hang Out With Us
Biden Proposes Plan To Give Every Child Free “High-Quality” Preschool
A Private School In Miami Says It Won't Employ Vaccinated Teachers
Meghan Markle Reportedly Doesn't Want "A Big Baby Shower" As Her Due Date Nears

Biden's campaign released four different styles of campaign signs for "Animal Crossing" players on Tuesday, including one featuring the official Biden-Harris logo, The Verge reported. Other styles include the campaign's "Team Joe" logo, the "Joe" Pride logo, and a sign with Biden's aviator sunglasses in red, white, and blue against a gray backdrop. To access the signs, players must scan the design QR codes through the Nintendo Switch Online app.

Although unconventional, the Biden campaign's foray into "Animal Crossings" is evidence of how candidates have had to get creative about campaigning this year as the ongoing coronavirus pandemic makes traditional rallies and in-person events a health risk. Instead of traditional campaign stops, the Democratic nominee has hosted a few, glitch-ridden virtual town halls, reported Vice, and a socially distanced conversation with vice presidential nominee Kamala Harris.

But Biden's team is hoping their foray into video game campaigning will help them reach new voters. "'Animal Crossing' is a dynamic, diverse, and powerful platform that brings communities together from across the world," Christian Tom, the Biden campaign's director of digital partnerships, told The Verge. "It is an exciting new opportunity for our campaign to engage and connect Biden-Harris supporters as they build and decorate their islands. As we enter the final campaign stretch towards November, this is one way we are finding new creative and innovative ways to meet voters where they are and bring our supporters together."

Both the Democratic Party and Biden's campaign have failed to fully energize young voters with 56% of Gen Z respondents in a NextGen poll, according to The Hill, reporting to disagree with the statement: "The more I hear about Joe Biden, the more I like him." Biden's recent expansion into "Animal Crossing" could be an attempt to reach younger voters. The campaign has reportedly teamed up with gaming influencers to promote the new signs within the game, reported TMZ, and get players excited about decorating their yards with them.

But Biden-Harris campaign yard signs may be only the beginning. Tom told The Verge the campaign was looking to roll out more digital swag soon. "This is just the start of how we plan to engage players ahead of November as we're already looking forward to rolling out more digital swag, voter education tools, and organizing efforts on 'Animal Crossing' and other platforms," he said.