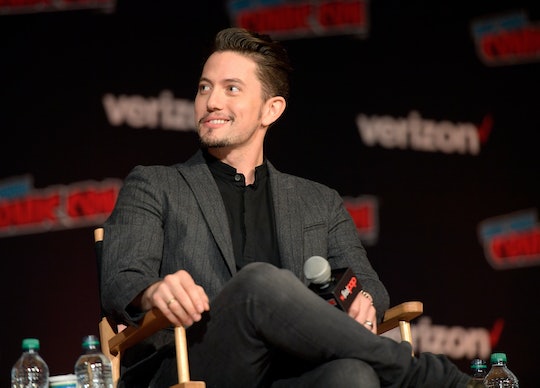 Believe it or not, it’s been ten years — yes, a full decade — since the first of five Twilight films premiered in theaters. Even fans of the book series by Stephanie Meyer couldn’t have predicted the massive response the first film received. It was a phenomenon that occasionally challenged the success of the Harry Potter franchise, which was pretty remarkable in it’s own right. Now, ten years later, Twilight’s tenth anniversary brought the cast back together at New York Comic-Con, which is where I was able to catch up with Jackson Rathbone in-person for Romper. All these years later, I couldn’t help but wonder: what is the biggest misconception about Twilight?

Rathbone took a moment to think about it, then told me: “The most common misconception is that it’s only for a female audience. The amount of men that I’ve met over the course of the years that actually really dig the films, they’re generally much more open minded guys that can dig a female protagonist film.” The actor who played Jasper Hale, one of swoon worthy Edward Cullen’s brothers, also brought up another good point: the film landscape was very, very different ten years ago. “You’ve got to think, ten years ago, Twilight was one of the first film series that had a lead female protagonist in this kind of story. Before that, it was Harry Potter, and Harry Potter had Hermoine, and she’s incredible, and a wonderfully written character,” he explained. But, as Rathbone continued to point out, Bella Swan was different. “Getting to see her from this kind of shy, awkward teen girl go, in the course of four books, five movies, into this all-powerful vampire bad-ass. Not a lot of films did that, and I think a lot of men are perhaps intimidated by strong women.”

If history has taught us anything, he’s not wrong. Thankfully, Rathbone knows the importance of being a man surrounded by strong women thanks to the female-centric home he was raised in. “I grew up with very strong women in the household, southern women, all sisters, and I’ve always respected them,” Rathbone, who looks like he hasn’t aged a single day since the first Twilight film was released, tells me. He went on to praise Twilight’s first director, Catherine Hardwicke, for the iconic films she made long before Twilight was even a thought. “I remember watching Thirteen and being blown away,” he explained. “Those are the kind of stories that we’re seeing a lot more of nowadays, and it’s about damn time.”

In the age of the reboot and the remake, Rathbone admits he wouldn’t be afraid to return to Twilight if the right project came along. His preferred next step for the franchise? To go back in time to a pre-Edward and Bella world — specifically the origin stories of Jasper and Alice. As Rathbone put it, "Jasper and Alice have these really beautiful, lush backstories, and we get to see a bit of it in the clips with Jasper, but we didn’t get to see it for Alice. And I think that would’ve been kind of a real cool movie.” Again, he’s not wrong — and I’m sure Twilight fans would be thrilled to see a project like that come to life, too.

As for where Rathbone is in his career ten years after the mass success of Twilight, he’s still hard at work making films and music. His next film, Heart Baby, was a passion project based on the true story of a prison boxer who was offered a chance to be released from his life sentence to fight in the 1984 Olympics. To add to that, Rathbone was excited to tell me that he worked on a lot of the film’s music. “I sing and I play guitar, it’s pretty fun,” he said. Speaking of, Rathbone recently released his first solo album, American Spirit Blues.