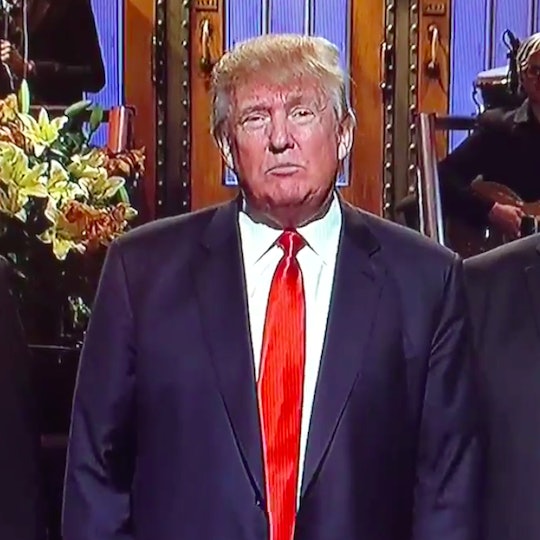 Nearly every episode of Saturday Night Live has a scene that goes viral overnight (or “talked about around the water cooler,” as they did back in the day). But when NBC announced that Apprentice host-turned-lead GOP presidential candidate Donald Trump was hosting SNL, it was almost guaranteed there would be several buzzworthy moments from Trump’s SNL hosting gig that people would be talking about on Monday morning. And unlike when it comes to his misogynistic quips about women, immigrants, and, well, basically anyone people who isn't him, the Trumpster didn’t disappoint. Still, there’s one thing that happened tonight on SNL that seems destined to be, as Trump would say, huuuuuge. Unfortunately for The Donald, it barely involved him.

Back when Trump hosted SNL in 2004, he was best known as a real estate mogul and the man behind the “You’re fired!” catchphrase. Even then, his “nobody’s bigger than me, nobody’s better than me” opening monologue with meta moment with usual SNL impersonator Darrell Hammond was an instant classic. In the 11 years since then, Trump’s been busy doing more mockable things and becoming the frontrunner for the GOP presidential candidacy. This time, he kicked off the show with another monologue that was pretty good when it just featured him for the first few minutes. But since that really isn’t much different from what’s happened at the Republican debates or on his Twitter stream 24/7, that isn’t the best moment from the night. Instead, it was Trump’s seconds-long scene with Larry David at the end of the monologue that really stole the show.

Probably to The Donald's dismay, the best part of the clip — and the reason it seems to be such a hit — is David's cameo, especially since he said what many people were thinking about Trump being a racist. As a sure sign of the scene’s success, people immediately began talking about it on Twitter...

Almost as soon as the scene was done — which effectively concluded David's appearance on the show, following his cold open reprisal of Bernie Sanders — people started suggesting David hosts SNL next. And that's one idea I think almost all Americans could support.

Watch the full monologue below: