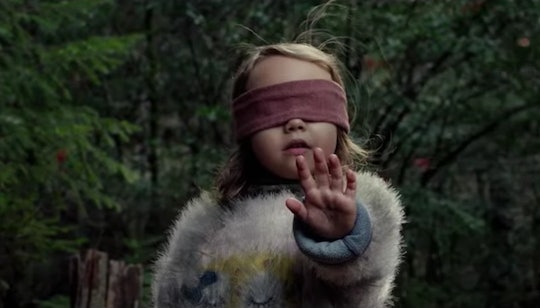 The 'Bird Box' Challenge Is Both Extremely Offensive & Dangerous

At the very end of 2018, one of the most hotly anticipated Netflix movies was released and quickly became a cult hit. Bird Box stars Sandra Bullock in a post-apocalyptic hellscape in which seeing supernatural forces incites people to believe their worst fears are coming true, leading most to die by suicide or other forms of inflicted violence. Therefore, Bullock and her co-stars must wear blindfolds so as not to be influenced by the "monsters," a concept which the internet has now created a challenge out of. However, the Bird Box Challenge is far more offensive and dangerous than many people may realize.

As a debriefer, the whole concept of the Bird Box Challenge is that people perform everyday activities — as benign as eating breakfast to as potentially lethal as driving a car on the highway — all while, you guessed it, wearing a blindfold. Though it's not exactly abnormal for people to create jokes and memes and games out of pop culture, this challenge in particular is really raising eyebrows as it is not only insensitive to people who have eyesight impairment, but The Guardian reported the consequences can be very, very severe. Enough so that Netflix itself had to issue a statement warning against participating in the challenge.

The streaming service posted to Twitter, saying: "Can’t believe I have to say this, but: PLEASE DO NOT HURT YOURSELVES WITH THIS BIRD BOX CHALLENGE. We don’t know how this started, and we appreciate the love, but Boy and Girl have just one wish for 2019 and it is that you not end up in the hospital due to memes."

On social media, some users are posting videos of themselves and friends trying to do things while blindfolded, and the tasks are at times extremely dangerous. One such video shows an individual trying to drive a car down the highway with a blindfold on while his friend laughs in the passenger seat, another shows someone trying to navigate their way through the dark and running into a parked car, while yet another shows a father and his two kids running around the house bumping into things while wearing cloths over their eyes.

The challenge has even scaled to social media stars doing full YouTube videos trying to navigate their entire days blindfolded, The Verge reported.

Though to some the challenge may just be seen as another innocuous joke, it really isn't. Aside from the fact that in many cases, someone's personal safety or, even worse, the safety of innocent bystanders (as would be the case on the highway, or in public) is being put severely at risk. There is absolutely no reason, ever, to operate a vehicle or any other kind of machine blindfolded — no matter how funny it may seem to you, your friends, or the internet.

On top of that, the challenge is just generally insensitive given that there are people in the world who are living with visual impairments, and they navigate through their every day lives without being able to see. However, these individuals take precautionary measures to ensure their safety, like utilizing service animals and going through years of training and therapy to live safe and healthy lives.

Disregarding the safety and oneself of others — especially in such an extreme way — is not funny. It is not cute, and it is not a ploy for social media fodder. It is unintelligent, it is mindless, and it needs to stop ASAP, no matter how many likes and RT's you may have to forego.