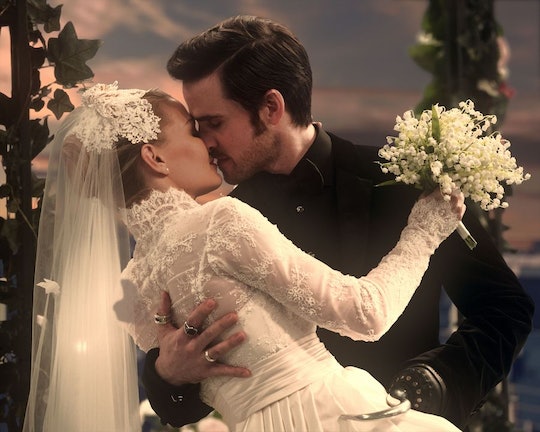 Hook & Emma's Wedding On 'OUAT' Ended On A Cliffhanger

Just leave it to Once Upon a Time to have a very happy moment end in an epic cliffhanger, leaving the fate of all of Storybrooke in the balance. During Sunday night's highly anticipated musical episode "The Song in Your Heart," Emma and Hook finally tied the knot and were in the midst of their joyous wedding reception when the clock struck 6 p.m. and the Black Fairy's curse was unleashed on Once Upon a Time. So the big question on everyone's mind is, naturally, what happens next?

At the beginning of the episode, Regina discovered that the amount of fairy dust Fiona (aka the Black Fairy) had collected was enough to create another curse on the whole town ten times over. For what purpose? With the final battle looming, the curse is supposedly meant to separate Emma from the rest of her loved ones so that she's forced to face off against the Black Fairy entirely alone. But as the episode proved, she's never been alone. The songs of love from her family and friends has always been in her heart since even before she was born. (A little cheesy, I know, but I can't pretend I didn't love this episode so very much.)

Emma was able to defeat the Black Fairy (at least temporarily) by unfreezing her parents, Regina, Zelena, and Hook due to some impressive vocal abilities. But it wasn't enough to stop Fiona from unleashing the curse as planned. So where will they all be taken to this time around? It's a question that's bound to be answered relatively quickly.

The Season 6 two-hour finale is next week and considering Once Upon a Time has yet to be picked up for a seventh season, the final episode will supposedly give fans a sense of closure just in case the show is unable to return for more. Ideally good will triumph over evil and everyone will be able to finally get a happily ever after. But when has this series ever been predictable? Things could go any number of ways, but as for where this curse will take everyone and what it will mean for their respective futures has yet to be seen.

These characters have journeyed to a variety of different fairytale worlds. However, considering the Black Fairy is behind this very powerful curse, the destination is bound to be fraught with danger. But wherever they end up, at least they're all together and will hopefully come out of this whole ordeal unscathed.