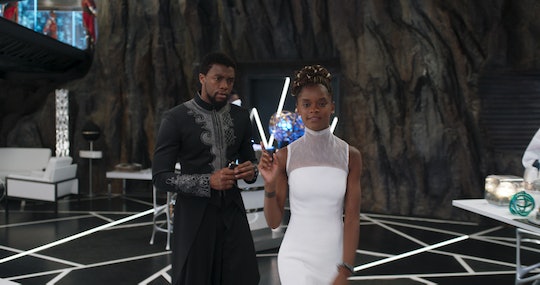 There's always a certain excitement that comes with a new superhero joining the film universe alongside people like Iron Man, Captain America, and Spider-Man. The Black Panther's entrance onto the scene, though, is otherworldly. The film, pre-launch, is set at 98 percent on Rotten Tomatoes and has already been breaking advanced ticket sales records. Needless to say, people are hyped about Black Panther and the future of the Marvel Cinematic Universe. Apparently, so is Marvel Studios, because the Black Panther post-credit scenes incorporate and introduce stories that basically promise that this is only the beginning of Wakanda's place in the MCU. (Spoilers for the entire plot of Black Panther follow.)

Black Panther tells the story of T'Challa, who has returned home to his country of Wakanda to take his rightful place as king following his father's death. Wakanda is a fictional country in Africa that, according to the rest of the world, is considered a third-world country. In reality though, Wakanda is the most tech-advanced country there is due to great minds and Vibranium, a meteoric material that, you guessed it, is also used in Captain America's shield.

The first post-credit scene in the movie is all about introducing the Wakanda advancements to the rest of the world, something that T'Challa and Wakandans were initially against in the film. Michael B. Jordan's character, Killmonger, wants to introduce the world to Vibranium after taking over as king, but in a more nuclear and dangerous way. By the end of the film, T'Challa comes up with the idea to share the wealth of knowledge to the rest of the world, starting with teaching Oakland kids about the technology and science that takes place in Wakanda.

In the first post-credit scene, T'Challa presents Wakanda as a country that will no longer be isolated from the rest of the world (it appears he is at a U.N.-type of gathering). Martin Freeman's character, Agent Ross, smiles in the back as he listens to the announcement being met with initial confusion, as his colleagues don't yet realize the potential that lives within Wakanda.

This scene opens up endless possibilities, both good and bad, to the Marvel Cinematic Universe. The technology that Wakanda possesses can do wonderful things — see: Shuri's inventions — but getting Vibranium into the wrong hands opens up the possibility of world destruction.

T'Challa's sister, Shuri, is arguably the standout of the entire Black Panther film. Not only is Letitia Wright a phenomenal actress who has brought to life this funny, smart, quick badass character, but Shuri also embodies the future potential of MCU. And if you didn't stick around long enough, you may have missed her connection to another Marvel character that truly made theater-goers gasp.

In the second post-credit scene, a man wakes up in Wakanda, surrounded by slightly confused, but intrigued, children. They start screaming that "The White Wolf" is awake, and run away. It turns out that the man is Bucky Barnes — yes, that Bucky — and it seems he's just come out of cryogenic stasis. He's greeted by Shuri.

Of course, you might have put together that there was something happening with Shuri and her lab. Earlier in the film, there was a small Easter egg that hinted that Shuri was working on something... or someone when she said "another broken white boy for us to fix," when Agent Ross came into the lab injured. Bucky seems to be the other "white boy," and it isn't too far-fetched to assume that Bucky is "fixed."

According to Den of Geek, the name "White Wolf" has meaning to the MCU universe. In comics, according to DoG, White Wolf was a white man named Hunter, who was meant to lead a covert-ops organization called War Dogs. There isn't any proof that Bucky is the White Wolf other than the kids screaming the name at him, but at least we know that he exists in the MCU world beyond the comics.

The post-credit scenes in Black Panther lay the ground work for a bunch of huge storylines to be explored in the future. We'll just have to wait and see how these new developments are incorporated as the MCU grows.