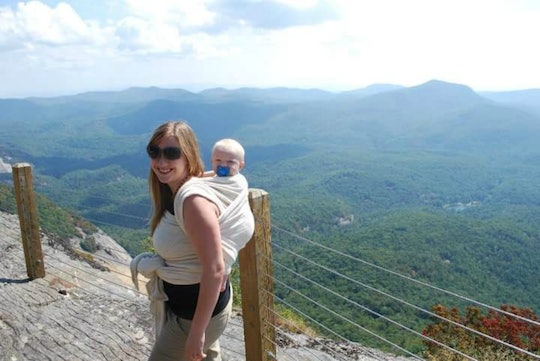 The Perfect Blank Stretchy Tank For Your Postpartum Wardrobe

I was pregnant for the first time, and I needed something to wear. All of my shirts were riding up my very large tummy, and I live in the South, where it's hot, so I needed tank tops. I decided to go shopping at Target. That's where I found The Shirt.

The Shirt is actually called the Be Maternity Seamless Ruched Tank, but I always just called it The Shirt. It wasn't a standard cotton tank with elastics ribs on the side; instead, it was made of a stretchy-soft nylon/spandex blend. I bought two, and spent about $25 bucks each for them.

I wore The Shirt almost every day through my oldest son Blaise’s pregnancy. As the days crept toward his due date of December 20, I began to layer the Shirt underneath flannels or long-sleeved t-shirts. It felt secure. Its clinginess was comforting, not suffocating. And since it came down to a little bit below my crotch, even with my belly, I knew it wasn’t going to ride up and show my stretch marks.

I bought more. I slept in the damn things. By the time Blaise was born, I had four. 8 years later, I'm still grateful to the Shirt, because it saved my pregnancy and postpartum wardrobe.

After we brought Blaise home from the hospital, I put the Shirt on. I was padding around the house, ice packs in my crotch and my hair like a scarecrow’s, when the baby needed to nurse. I settled on the couch with a book and a Boppy. Bear handed me the baby. And instead of pulling my whole Shirt up to nurse, I realized that, like a real nursing tank, I only had to yank the collar underneath my breast. It was stretchy enough to breastfeed in and still retain its shape.

Before the Shirt, I was confined to those ugly snap-strap, shelf-bra nursing tanks that think an XXL is as big as boobs get. Jesus blessed me with a set of HHs, so I needed more support than an itty-bitty strip of elastic if my boobs weren’t going to fall down to my ankles. The Shirt let me wear real nursing bras underneath. (Hot Milk goes up to H, which is where I stayed until I started tandem nursing). It was a black tank, so I could pair it with virtually everything. And because the Shirt was stretchy and thin, I realized I could layer anything on top of it. So layer I did.

The whole time I was nursing Blaise, my wardrobe consisted exclusively of a HotMilk bra, the Shirt, and whatever I decided to put on top of it (usually a T-shirt, because I was postpartum and didn’t care). Now that I didn’t need to worry about a tank top riding up, I occasionally wore a regular tank top to bed, but I found the clinginess of the Shirt comforting and easy to nurse in all night, so I was sleeping in the Shirt as well. Once I was nursing two kids at once, I found I could yank both my boobs out of the Shirt at the same time. It was that forgiving. Whatever I wore, you saw a ring of black tank top peeking out from underneath.

I spent seven years either pregnant or nursing. (In fact, I’m still nursing, but only once a day.) Through it all, I wore the Shirt. I bought more when the collars got sprung, as they tended to do after around a few years. They also got stretched-out from constant wear. But they were so cheap that I could just buy new ones.

I’d say I don’t wear the Shirt anymore, but I’d be lying. I got used to having a long, clingy tank top underneath all of my T-shirts, so the Shirt comes out whenever I’m dressed down. And if I’m working out, I’m almost definitely wearing the Shirt, though I have a few athletic tanks I alternate with. But if I'm hiking, spring and fall kayaking, running, or sleeping, I’m wearing the Shirt.

I have a pile of Shirts now in my room, the same way an old man accumulates sleeveless, ribbed white undershirts. Some are in better condition than others. The beat-up ones get worn for workouts around the house. I wear the tighter ones under t-shirts. I’m still addicted to them, and when they get into really bad shape, I’ll probably replace them. They’ve gone from a pregnancy necessity to an indispensable part of my wardrobe. I thought $25 was expensive when I first got one. But now I realize: the Shirt is worth every cent.

More Like This
The 16 Best Affordable Maternity PJs & Lingerie Sets On Amazon
The Cutest Petite Maternity Clothes From Amazon Under $40
How Much Hair Loss Is Normal? 9 Signs You’re Losing Too Much Hair
The Best Halloween Family Pajamas To Match Your Boos