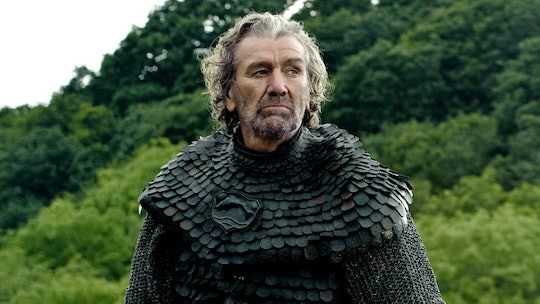 The Blackfish Dies On ‘Game Of Thrones,’ Which Means Jaime Has Control Of Riverrun

Just when Sansa and Jon needed Riverrun and their uncle's support the most, the Lannisters had to go in and screw it all up in true Lannister fashion, mind you. On Sunday's Game of Thrones, Jaime was able to send in Edmure Tully and order the death of his dad. Since the Blackfish died on Game of Thrones, leaving Riverrun with Jaime, Sansa will most likely not be able to lean on their army as the Battle for Winterfell commences. So basically, once more, Sansa and Jon are kind of screwed.

If you remember correctly, the whole point of reintroducing Riverrun and the Blackfish on Game of Thrones was to serve two storylines. First, the Blackfish had taken back his hoew from the Freys and the Lannisters wanted to help their "friends" get back the home they stole. Second, Riverrun was important because Sansa and Jon needed the help of the Tully army in their upcoming Battle of the Bastards — and House Tully and Riverrun meant ample men ready, available, and loyal to House Stark. Unfortunately, Brienne isn't as ruthless as the Lannisters and had to concede, despite the Blackfish's inclination that maybe, on some level, he really did want to help Sansa and Jon take back their home.

Once again, regardless of whether or not it was meant to be, the Lannisters screwed over the Starks. Which also brings us to the fact that, with the Blackfish dying on Game of Thrones, control of Riverrun goes directly to Jaime and The Crown. Though The Crown was basically in control of Riverrun before all this started, now Jaime is armed with the knowledge that not only is Sansa Stark alive and well, but he also knows her location and that she and Jon are trying to round up everybody the can to fight for them as they embark on a crazy-ass Northern war. No offense to Jaime, but he's not exactly the guy you want knowing all your secrets just before you're about to storm Winterfell in hopes of taking back your home.

Seeing the Blackfish die on Game of Thrones was no great loss, since he'd been absent long enough to almost forget about him, but the death of the Blackfish means that Sansa is out another army, that Brienne has to row back to her and give her the bad news, and that this chore just basically amounts to more time wasted. And let's be honest: Sansa and Jon don't have a ton of time to waste.