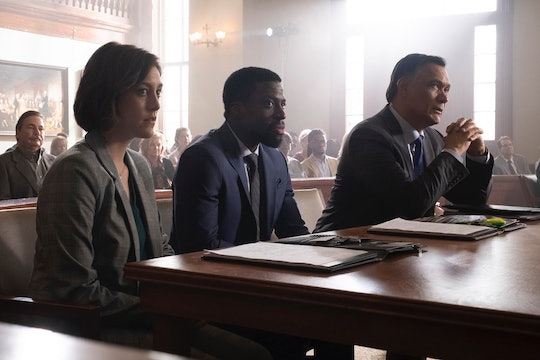 Bluff City Law is a new NBC procedural that mixes courtroom antics with heartfelt family drama. On the show, a father and daughter decide to mend their broken relationship for the greater good, though it's not a smooth journey. But luckily it won't be one they'll have to undertake alone, because the Bluff City Law cast will be there to help them along the way.

Jimmy Smits stars as Elijah Strait, a heroic lawyer who tries to right egregious wrongs through legal means. Caitlin McGee is his daughter Sydney. After years of estrangement, she finds herself pulled back into her father's orbit when she decides to tackle the same kind of law. He brings her back into the family law firm where she got her start so they can embark on their new venture together. Anthony Little (Michael Luwoye) and Jake Reilly (Barry Sloane) are both attorneys at Elijah's firm, where Della Bedford (Jayne Atkinson) also works.

Meanwhile, Josh Kelly is Sydney's ex-husband Robbie, a local cop, and MaameYaa Boafo is Sydney's best friend Briana Johnson, a private investigator. Stony Blyden and Mo Gallini round out the cast as characters Emerson and Edgar Soriano, respectively, whose roles are not entirely clear ahead of the premiere.

Jimmy Smits might be the most well-known member of the cast because of his lengthy career on television and in film. He's even made his mark as a TV lawyer before: Smits previously appeared on L.A. Law as Victor Sifuentes. He followed that up with roles on NYPD Blue, The West Wing, Dexter, Sons of Anarchy, The Get Down, and How to Get Away with Murder, among others.

Caitlin McGee has appeared in several TV shows and TV movies before, but generally for an episode or two. She popped up on Blue Bloods, Sex & Drugs & Rock & Rock, Halt and Catch Fire, and The Marvelous Mrs. Maisel. Most recently, she was on Modern Love. If she seems familiar while you're watching Bluff City Law, then there's a good chance you've seen her in something before.

Like Smits, Jayne Atkinson has had a long and varied TV career. She snagged roles on Madam Secretary, House of Cards, Castle Rock, and The Good Wife — and that's just the tip of the iceberg. She's been working on television since 1985, so she's accrued an impressive amount of credits.

Michael Luwoye's list of parts is shorter but impressive in its own right; he's been on Curb Your Enthusiasm, The Magicians, and She's Gotta Have It. He also played the titular role in the Broadway musical Hamilton. You may recognize Barry Sloane from Longmire or Revenge, while Josh Kelly is a One Life to Live alum who also appeared on UnREAL.

MaameYaa Boafo has taken part in the TV series An African City, plus episodes each of The Blacklist and Chicago Med. Stony Blyden's longest TV role was on Hunter Street, though he was also in the movies Dude and Hope Springs Eternal. Mo Gallini spent a few years on Chicago Fire, though you might also recall him from 2 Fast 2 Furious.

The cast of Bluff City Law are TV pros, and they'll be bringing that combined skill to the courtrooms of Memphis this autumn.