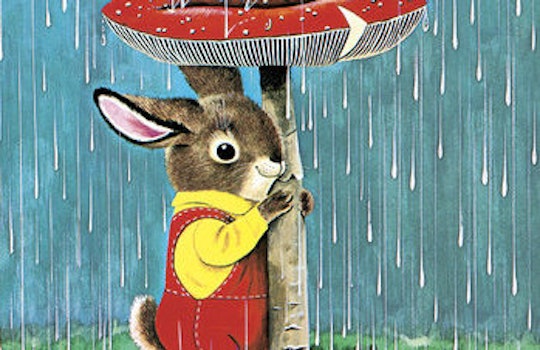 I don’t remember much from when my daughter was a toddler because the truth about that age, if you’re lucky, is that it’s not really eventful. Sure, there are the firsts: walking, words, teeth, and haircuts. There is also the fierce joy and frustration of the toddler — one minute they are laughing hysterically over a ripped piece of paper and the next minute they are wailing because you didn’t let them hold the fork in the right way.

What I remember most about caring for my daughter at that age was the way I learned to think of time differently. The day was long and it had its routines of meals, naps, trips to the park, play, bath time, and books. I was sometimes bored. Perhaps this isn’t a popular opinion, but so be it. Parenting is not always about events and activities; sometimes it’s the sludge, the moving through time, as if you have the tiny legs of a toddler because, well basically, you do.

Still, it was good for me to slow down, to lose track of time, and to be bored. It reminded me of my childhood in western New York. Hours spent doing almost nothing of consequence.

She wore the world’s tiniest skinny jeans with a diaper. She wanted to push the stroller herself. We stopped to play in a puddle. We made a picnic on the grass. She wanted more goldfish. We did the letter puzzle. We read the book. We read it again. I sang a song. We rode the pay pony by the bodega. We met a friend. We got a treat. We walked home. The next day I went to work and her dad repeated it all again. We alternated days. Teaching. Childcare. Teaching. Childcare.

The book begins, 'I am a bunny. My name is Nicholas. I live in a hollow tree.'

One of my daughter’s favorite books during this time was I Am A Bunny by Ole Risom and illustrated by Richard Scarry. Until writing this essay, I’d assumed that Scarry, author and illustrator of the classics and still-in-print, Busy Town and Cars, Trucks, and Things That Go, and too many other books to name here, had also written the text for I am a Bunny, but it’s actually Risom who is responsible for simple, haiku-like, seasonal focus of this charming book. According to his New York Times obituary, “Mr. Risom was vice president and art director of Golden Books Western Press from 1952 to 1972 and then vice president and associate publisher of the juvenile division of Random House from 1972 to 1990… Janet Shulman, vice president and editor at large at Random House children's books, compared his standards and vision to that of Ikea in the furniture world.”

The book begins, “I am a bunny. My name is Nicholas. I live in a hollow tree.” Risom’s son is named Nicholas, and Scarry draws him as a bunny boy in a yellow shirt and red overalls. Scarry’s animals are always anthropomorphized and his world is a lost, if not, utopian vision; nature, towns, and cities brimming with busy activities and jobs for all. My kid and I also got lost in Busy Town or hunting for that crafty little Gold Bug who Scarry hid on every page of Cars, Trucks, and Things That Go.

Nicholas is not busy at all. His is a pastoral life without work or responsibility. “I chase the butterflies, and the butterflies chase me.” He is less animal, and more animal watcher, and unlike in the beautiful, devastation of The Velveteen Rabbit, his consciousness is never disrupted by the presence of real, unclothed bunnies. The seasons come and go and Nicholas always finds shelter. “When it rains I keep dry under a toadstool,” and on the last two pages, “And, when winter comes, I watch the snow falling from the sky. Then I curl up in my hollow tree and dream about spring.”

Really, it’s a book about doing very little and feeling just fine about it, which is a good way of thinking about a toddler’s life. Nicholas picks flowers, lies in the grass, watches frogs, and blows dandelion seeds into the air.

My daughter’s favorite pages is covered in a leaping Nicolas and 24 multicolored butterflies. This page is still crusty from reading it at the dinner table. We loved this page the most.

Most of all, the book appealed to the poet in me — the simple short sentences, the laser-like focus on the image, and not a spare word. Scarry is more of a diagrammer in his books. Here is a market, a post office, a train station, and here are the things in it. I don’t think you really read Scarry’s books, so much as use them to name the world. Risom is a storyteller, and so the collaboration works. The drawings are sweet, landscapes of green, white, yellow, and gold. My daughter’s favorite pages is covered in a leaping Nicolas and 24 multicolored butterflies. This page is still crusty from reading it at the dinner table. We loved this page the most.

'I Am A Bunny' by Ole Risom, illustrated by Richard Scarry (Penguin Random House)
Amazon

Still, as I re-read the book now, I’m struck by sadder tones. Nicholas is alone without connection to the very animal he is. His world seems more suburban than natural, though there are no houses. The landscape is not wild, but cultivated. I picture Connecticut in 1963 (the year of the book’s publication) and I read Nicholas as a white, for no other reason than he is not black. Maybe this is a stretch, but I notice no black bunnies in any of Scarry’s drawings. I look at online, and see he has made a career out of drawing bunnies. I don’t expect much in terms of race, representation, and rabbits in 1963, but I want to name it here now.

Now that my daughter is 9, we are busier and our days are less about passing time and more about getting things done. We are more distracted, too — by our screens, her state tests, and the daily unfolding dramas of her friendships. Nicholas is nostalgia for us now, but a bunny we still love and return to occasionally.

There are so many rabbits in children’s stories. The radical bunnies in Watership Down, the trickster Brer Rabbit from Indigenous and African cultures, who was later turned into a racist caricature by Disney; Peter Rabbit; The Velveteen Rabbit; and all of the rabbit books that Scarry wrote, Richard Scarry’s Bunnies, The Naughty Bunny, Box Full of Bunnies, and The Bunny Book. There’s also John Updike’s legendary Rabbit series for adults. This year, we met a new rabbit, the dapper and unfeeling china doll rabbit in Kate DiCamillo’s The Miraculous Journey of Edward Tulane. First, her teacher read it the class and then my daughter brought it home to read to me. As so many other readers have noted it’s a beautiful, heart-wrenching book about a rabbit in a suit who is forced from one family to the next, until years later he’s united with his original owner, who is now a grandmother. Edward’s journey is about suffering, loss, and fear. He is misgendered, robbed of his clothing, bears witness, and is forgotten, but more than anything he learns to have feelings. I loved being read to by my daughter as we snuggled in bed. We both cried and yelled at the drama of Edward’s life.

Why do rabbits hold so much power for us as readers? They are soft and preyed upon, not unlike many children in this world. In The Book of Symbols, rabbits “manage to live under the shadow of death,” have “tricksterish energies that subvert the usual order of things,” and “are known to dance and leap in meadows in the moonlight, and cavort in sexual play” (288). Rabbits are easy kid-stand-ins — vulnerable and playful, tricksters who change us and teach us how to feel. Speedy and hyperaware, they seem to get that the world is both joyous and dangerous, and that mostly we survive it by wit and grit.