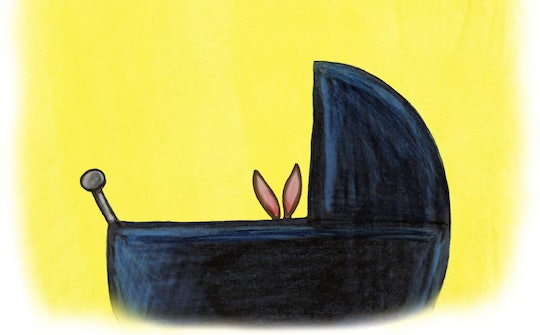 The Book I Wrote For My Daughter After Our Infertility Journey

When I was a child, books were my life. I was that kid hiding quietly under the covers at night, turning pages by flashlight, hoping my parents wouldn’t notice the faint glow coming through the crack in the door. As I grew up, I dreamt of reading stories to my own children, teaching them that books could open up doors to other worlds. But after my wife and I struggled with infertility, I wondered if that day would ever come.

My wife and I decided to begin trying to start our family soon after walking down the aisle. When we wed, she was 34 and I was 35. We were not “old” in the traditional sense, but we were quietly aware that we were approaching the demarcation where having biological children would begin to get increasingly more difficult.

After six months of trying on our own, my wife and I, pillars of pragmatism, went through a battery of tests to ensure there were no unforeseen physical, hormonal, or genetic obstacles in our path toward having a family. After returning home from our doctors’ appointments, we packed our bags and left for a long-planned vacation to the Finger Lakes, where we would drive around in a convertible with the top down, visit lush vineyards and breweries, drink sumptuous wine, and leave our stresses at home.

On the drive upstate, my wife’s phone rang. It was her OB-GYN. My wife’s face turned ashen. The blood tests came back with the news that my wife had diminished ovarian reserve, or DOR, which is defined as, “a physiological decrease in the number of eggs, resulting in an insufficient number to ensure a reasonable chance of pregnancy.”

The chances of us conceiving on our own were about 1 percent, give or take.

'Send us a picture of your baby!' our doctor said jovially, as she began our first retrieval.

We commenced a sullen trip, the first night of which we enjoyed a delicious bottle of wine we still talk about to this day. The drinks dulled the pain, because we knew upon return we would begin our fertility journey. We assumed, foolishly, that the journey would be brief.

“We’re young,” we said. “We have time. It just might take longer than we thought.”

We were right on the last part.

Four rounds of IUI did nothing but waste months and money. Our fertility doctor suggested we move straight to IVF. She assured us that, being relatively young and healthy, we were “model” IVF candidates.

“Send us a picture of your baby!” our doctor said jovially, as she began our first retrieval.

Our first round of IVF produced not a single usable embryo. Not one.

We went through three more rounds of IVF. My wife developed cysts on her ovaries after each round, which meant waiting months for them to heal before trying again. I became an expert at mixing together medications, drawing liquid into syringes, mixing them with powders, then injecting them into my wife, sometimes three times a day. We brought syringes on planes. We did injections right before leaving for a wedding. By the end, I was injecting her medication directly into bruises.

Daily monitoring meant driving from New Jersey to our clinic on the Upper East Side of Manhattan. Our lives revolved around our infertility.

We withdrew from social obligations, and watched with guilt-laden jealousy as our friends, who married after us, got pregnant one by one.

After each retrieval, we sat at home, unable to function, awaiting and dreading the call from our clinic to let us know many embryos fertilized.

It was never very many.

But the third retrieval gave us hope. We got four “grade 1” embryos, perfect specimens. Of those four, one would have to stick.

We transferred two embryos. The other two were frozen.

“You guys ready for twins?” our doctor asked us at the transfer.

Two weeks later, a pregnancy test registered the faintest of faint positive lines — a “squinter,” in fertility parlance. The next morning, which happened to be Mother’s Day, my wife went to our clinic for blood work. Later that day, our nurse called with the results.

And days later, my wife was no longer pregnant.

But we still had two perfect frozen embryos. Our clinic closed over the summers, so we took time to recharge. Mentally. Financially. Physically.

We drank. Exercised. Sat in the sun. Saw friends we’d been neglecting. And then, after a far-too-quick summer, we transferred the final two frozen embryos.

Neither stuck. We were back to square one.

That round gave us one embryo. One. Single. Embryo. And a grade 2 embryo, at that.

So what next? Do we switch to the World Famous Clinic, which would entail traveling cross-country several times a month, putting our lives on hold, while burning through our life savings? Do we look into donor eggs? Do we adopt? We embraced the idea of adoption, but knew it could take years. We were adamant about having a family — we just didn’t know how or when it would happen. And my dream of reading a book to my child seemed as faint as that positive line on the pregnancy test.

We decided to do one final round at our clinic before moving on to more drastic measures.

That round gave us one embryo. One. Single. Embryo. And a grade 2 embryo, at that.

As my wife lay on the table after having that solitary embryo put inside her, we talked about next steps with the resigned assumption it would not stick. We had grown used to the tears, used to the pain. Sorrow was a part of our life.

So when the pregnancy test came back positive two weeks later — a thick, full line, no squinter this time — my wife immediately began to cry.

It stuck. And nine months later our daughter was born. Perfect and healthy.

I fell in love with the idea of writing a book for our daughter, something we could read to her to help her understand our journey. To let her know the lengths we went to bring her home. To let her know just how much she was loved — before we even met her.

I wrote the text in secret and found an illustrator who had previously worked as a police sketch artist, or “Crayola Cop.” Given that I’d previously published several mystery novels, I considered that karma.

I titled the book Miracle, because that’s what our daughter was.

Miracle is the tale of a rabbit couple, Merle and Pearl, who fall in love and dream of starting a family. But Merle and Pearl find their dreams won’t come easily. So they dive deep under the sea, rocket out to the stars, trek across vast desert sands to find their miracle — all metaphors for what we felt we had gone through. And when Merle and Pearl gaze upon their child for the first time, they, like us, know that every hardship was worth it. Like us, they would do it all over again.

I worked on the book for five months in secret, and presented the finished copy to my wife for Valentine’s Day. She cried as she read it to our daughter.

I printed 25 copies of Miracle, to give as gifts to family and friends who had also struggled with infertility. My wife and family suggested I publish the story, saying it would resonate with families like us. I was hesitant at first, but realized something: reading other peoples’ stories got us through the dark times. Stories of success, struggle, and strength kept us going. Other people’s stories let us know that we were not alone.

So I decided to publish Miracle.

Too often, families suffer through infertility in silence, filled with grief, anger, shame, and sorrow. My hope is that we can pull back the curtain, make it easier for people to tell their stories. Let those in pain know they are not alone.

With Miracle, I decided to do my part and tell our story, seen through the eyes of Merle and Pearl. It is our story, but it is a universal one. I have written well over a million words in my career, but Miracle is by far the most meaningful thing I have ever put to paper. I am proud to share this story with other families like us, who have miracle children like ours, and have their own stories to share.

And hopefully one night in the not-too distant future, I’ll have the joy of catching our miracle reading under the covers late at night.